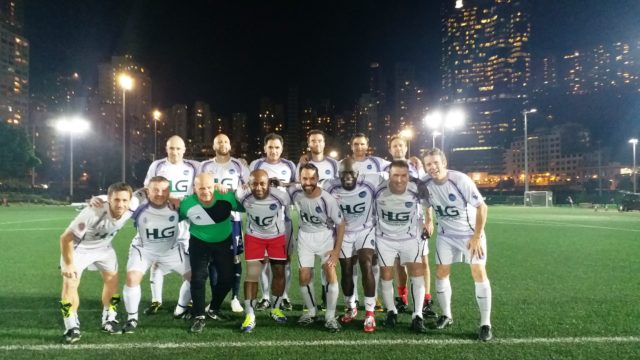 At the beginning of the day there were only 8 players confirmed for this game and in the morning Frank stepped up to be goal keeper and Patric would come straight from the airport after landing from UK, so we had 10. However, our list of “maybe” was extensive mainly because DBFC 7s training was happening earlier at HKFC and guys wanted to see if they had energy left, and so they did resulting in Sean, Pascal, Kieran, Bradders and Fouad turning up to play and give us a very strong squad.

The very (ridiculously) small pitch no. 3 at Happy Valley meant there was little room for loose ball control and the long ball for the forwards was not an option. The football needed to be short sharp passing and William in the centre of midfield executed this tactic consistently well, playing particularly good off Ariel. It wasn’t long before Ariel got the first goal by shooting from outside the box. BTDT immediately equalised from the re-start after their player ran through midfield unopposed to fire a low drive from 22 yards out, which Frank dived to comfortably cover but he tried to catch the ball and it squirted through his hands onto the post then rebounded back against him to settle 2 feet from the goal line for the BTDT forward to boot in. We were back in front (2-1) when Thierry headed a Scotty corner back across goal for Ariel to smash into the roof of the net. BTDT came straight back from kick-off again by launching a ball into the DBFC box and miss-communication between keeper and centre backs allowed the ball to bounce twice and the BTDT forward smacking in from 5 yards out. Fouad got us back in front with a run across the BTDT back line before unleashing a lovely shot into the bottom corner. However, again straight from kick off BTDT sent the ball down the left and a mix up between the LB and CB allowed the ball to be played onto the penalty area for the BTDT forward to run onto and equalise. So at half time it was 3-3 after 3 great goals worked by DBFC and 3 gifts for BTDT after blunders by DBFC defence.

DBFC were much stronger in the second have and the few BTDT attacks were dealt with by the now confident DBFC defence and Frank pulled off a worldly diving save to stop BTDT’s only serious chance of scoring. DBFC’s 4th goal followed great work down the right by Ariel to get passed 2 defenders and lay the ball perfectly into the run of Fela to drive a bullet shot from 18 yards into the bottom corner. DBFC’s 5th and final goal came from play down the left from Baz to Scotty to Kieran, who then skinned the BTDT right back to run onto goal and drive a shot passed the BTDT keeper into the net from a narrow angle.

MOM: This has to be 2 players: William with his simple dictating play in the centre of midfield and Ariel for his continued threat down the right and scoring 2 good goals.

DOD: The DBFC defence and keeper for the silly mistakes that led to the 3 soft goals by BTDT in the first half. The boys redeemed themselves with a strong confident performance in the second half. SO DODs for 40 minutes only.