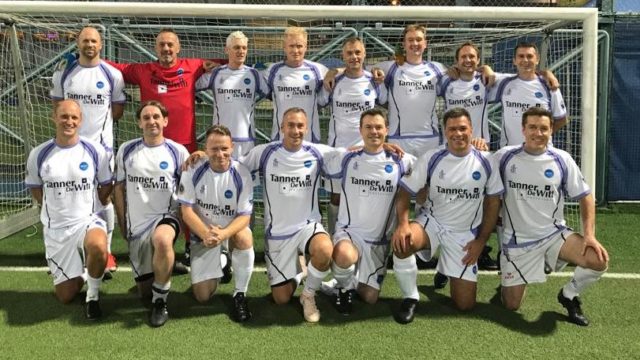 We were unlucky to come away with nothing in this one. We had plenty of possession and chances but failed to convert. Perhaps the clue to this result was that their keeper was MoM and our Stef was the least busy person on the pitch. Anyway, we went into the game without many attacking options and decided to stick Patric up top by himself, with Oisin to come on at HT. Our master plan was to use Matija as an attacking midfielder and make surging runs from deep – this worked a treat until Matija went (on several occasions) for his infamous “toe poke” finish. Gazelles put out a decent side with plenty of under 40s and were pretty organized throughout the game – always getting plenty of players behind the ball when we got possession and proving difficult to break down. After about 20 minutes, we went ahead after a loose ball in the box was hammered home by Andy (“dodgy calf”) Clarke. Gazelles were always threatening with a couple of mobile players up front and eventually – and for the only time – got in behind our defence after we failed to clear our lines. We started our rotations at 30 minutes and went into HT at 1-1. 2nd half was much of the same – plenty of possession in deep areas through OB and Kenny but not inside their half. After about 60 minutes, Gazalles scored what turned out to be the winner in what seemed a clear offside position. In games like this with a Gazelles referee moving within a 10 metre radius of the half way line (and no linesmen), these calls don’t go in our favour. We had some great chances to equalize, in particular a shot from Morse that was tipped on to the bar by the keeper and a header from Andy that was tipped against the post. All in all an enjoyable and competitive game and looking forward to the next in the trilogy of HKFC games on 1 November. MOM and DOD to Matija.