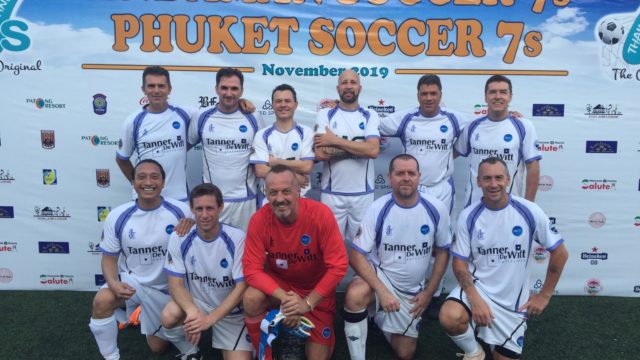 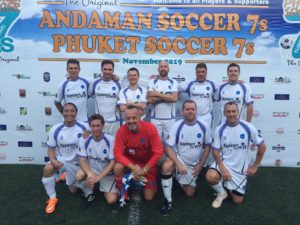 DBFC Vets entered a team into the over 40’s category tournament, which contained 4 groups of 4 teams (16 teams totally) to play 15 minutes per game / 7 a side on half of a full size pitch.

Tournament and Team manger Pascal gives a summary of the DBFC Vets football is as follows:

The DBFC Vets players were ready to physically suffer after 2 nights out for most of the players and with an early afternoon start in the Phuket heat.

On top of that, half of the team already played 3 games in the morning for our affiliate team “Black Devils” from Bangkok in the over 45’s category.

Luckily, the opposition boys from Macau looked to be suffering even more from the heat and they played a very defensive football, leaving DBFC with most of the ball possession, pressing into their half.

After a few chances, Fouad scored our first goal with a great shot from distance into the top corner; a typical “Fouad goal” from our most dangerous attacker.

Even being behind on the scoresheet, the Portuguese boys were still playing very low and did not (could not) threaten us.

A inevitable second goal did eventually arrive when Amin made a brave diving header on the goal line after a good cross from Fouad.

2-0 was the final score, a bare minimum considering DBFC’s outrageous domination of the game.

The second game was totally different. The opponent, a team that seemingly does not party like us, looked very fit and also full of good football players…and so they were.

The game was quite even. DBFC was holding, knowing that a draw would be a good result against this talented side.

Unfortunately, the game changed after 10 minutes when after a free kick, the ball hit the cross bar just to bounce back in our box. DBFC players did not clear it quickly enough and Thierry finally tried to clear with a big boot. Unfortunately, the ball struck the back of a Desa Hartamas player to deflect high over the top of Stefan to finish perfectly, for them, under the cross bar. The scorer did not even noticed he scored one of the luckiest goals in the history of football.

After that goal, it became difficult for DBFC to press those relatively young vets who were smartly keeping the ball. Desa Hartamas even ended up scoring a second goal after a pass in our defense was intercepted and their fast striker beat Stefan from close.

Following the group results, we needed a win to finish in the top 2 and qualify for the Cup games on Sunday.

Melwood Boys knew that and started saving time after about 1 minute into the game. Their goalkeeper pretended a back injury. Their defenders took  ages to collect the ball for goal kicks, throw-ins, etc.

Those guys could pass the ball around but were not as fit as Desa Hartamas and we knew we would have our chances.

The only goal of the game came after a great cross from Dirk, towards Fouad coming in on the back post, was intercepted by a retreating Melwood defender whose attempted clearance shot into his own net. Lucky goal for us this time but clearly deserved since the other team was not playing at all. After that goal, the Melwood Boys realised that their saving time tactics did not work and started to play but their lack of fitness and this time our smart passing all around the pitch allowed us to win this game. We were never in danger apart from a good chance they had coming out of nowhere one minute from the end.

DBFC was not the favorites against this team of Aussies who looked impressive the day before when winning all 3 of their group games convincingly. Moreover, our lone striker Fouad paid for his accumulation of games and could not play because of a back strain. We found a replacement from our Black Devils team but Koalas did not agree to him playing.

The game actually did not happen as we thought and DBFC got most of the ball and spent most of the time in the Koalas half. Pascal had many chances for a shot on goal or a decisive assist but all his attempts were deflected and we almost sensed we missed our chances. The game finished with a goalless draw and the 5 minutes extra-time golden goal (6 vs 6) were a reflection of the 15 minutes regulation time, with DBFC not able to score despite dominating.

So it ended with qualification being decided by sudden death penalties. The first penalty was for Koala and they scored but Thierry found the net as well. The second koala penalty hit the post and Stefan  collected the ball on the rebound at his feet. Pascal sealed the game after scoring his penalty and seeing DBFC Vets into the Cup semi-finals. Great achievement.

The opponent team seemed to play the same kind of football as Desa Hartamas and so we were expecting to suffer against fresh, fast and gifted football players.

This time, our diplomatic delegation managed to qualify Chad, who previously played a few minutes the day before with the Koalas (and that is why they did not want him to play against them in quarter-final) and who was not registered in our squad: a double infraction to the tournament rules that we succeeded to overcome for this important game. Rain FC showed fair-play and accepted that we could field Chad (probably because he was 50 years old and they looked confident).

Anyway, game on and we quickly realised that it won’t be easy against this bunch of fit and fast players running everywhere. But after a few minutes of solid defending, we started to find some good passing football and created some spaces and had a few chances of our own. After a through ball from Thierry, Dirk managed to get to it just before the keeper 2 yards from goal, only to fall on the ball as the keeper challenged and fell on Dirk. Dirk managed to keep his eye on the ball and flicked it with his foot as he lay spread-eagled with the keeper planted on top of him. The ball trickled over the line to score but the referee, without anybody complaining about anything, decided on his own that the goal should be disallowed. Only he knows why. This was the start of big problems for DBFC with the referee continuing to make very dubious decisions against us, contrary to the tournament’s own rules, and in doing so he seemed to be clearly helping Rain FC to reach the Cup final. It was like Rain FC had an extra player on the field but despite this DBFC resisted very well against Rain FC pressure and did not concede a goal.

The extra-time golden goal period (6 vs 6) was opening more spaces for both teams and both had their chances. Unfortunately, it is Rain FC who scored a goal in the very last minute from a long bullet cross in to our box, which was met at the far post by the head of a Rain FC player. This golden goal meant the end of our adventure and the start of our frustration as we felt somehow unwelcome and could have been in final ourselves.

To complete the story, Desa Hartamas won the final 2-0 against Rain FC.

So the DBFC boys got back onto the team Hash bus (Pascal’s organized transport) with a big box of beers and Baz’s boom box to belt out the tunes and get us all ready (in happy mode) for our final big night out in town. We are already looking forward to next year! 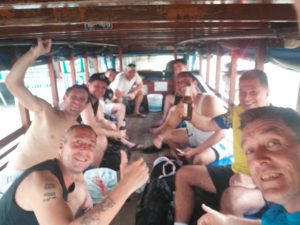 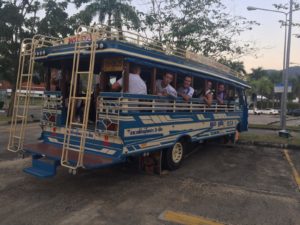