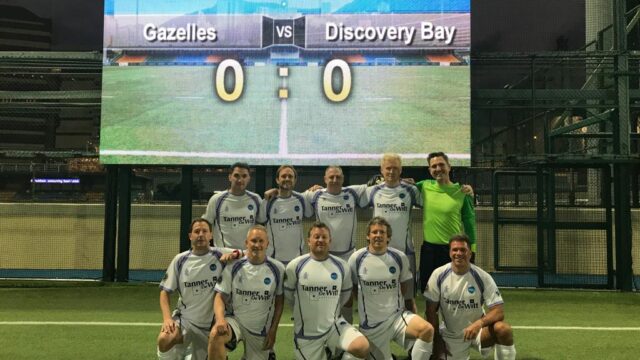 We started with our preferred flexible 4-3-3/ 4-5-1 and went 1-0 up after 3 minutes before Gazelles had a chance to settle. Thierry from the edge of the area caught the GK off his line and floated one over his head. Gazelles came back strongly and the defence had to work hard to keep them out – however eventually they too scored from a shot outside the area after we failed to clear our lines. With the game finely balanced, their CF got behind the CBs and went down after what looked a clean challenge by Steve to all except the referee. In an act of real sportsmanship, their penalty taker deliberately chipped the ball into Newley’s hands. Not long after we went 2-1 up after good interchange between our No. 9 Arch and Tim, ending with Tim finishing well from about 15 yards. H-T came and we started rotating with late arrivals Baz and Kieran coming on for Arch and Patric. We started the second half brightly and continued our rotations after 10 minutes with Arch coming back on for Steve at CB and David for Ben at LB. At this point, we looked as if we were holding on for a narrow win and Gazelles started to get more possession. However, the tide turned in the final 15 minutes and we started to create multiple chances, primarily for Kieran and Scotty. Finally Tim got to the bye-line and put one on a plate for Scotty to finish from close range. We ended up on the front foot and it was a well deserved win – plenty of good performances but probably Tim and Thierry shaded it with a full 80 minutes of hard work, not only protecting the back 4 but also getting forward to support our front 3. As ever, many thanks to Gazelles for their hospitality and in particular for their sportsmanship.