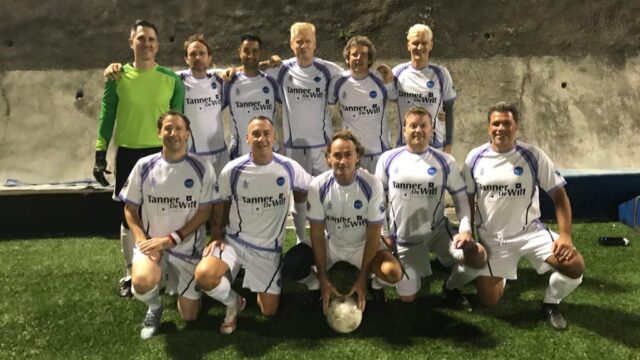 After a very slow sign-up, we ended up with a big squad, with our call for help resulting in appearances from Brighton Sam and Baz’s friend Yin. We started with the only 11 Kitted and ready to go for this early KO against Spartans, who are traditionally one of the best +45s. We started the game strongly but were relaxed about Spartans having most of the possession. We knew that the threat would come from their ex Polish international in central midfield and a very quick CF. We got a lucky break after 20 minutes when Simon pressurized their defender into an OG from outside the area. Newley kept us in it with some outstanding Keeping – first a tip over the bar from a long range shot and then saving a 1 on 1 when their CF got behind our CBs. After all our hard graft we were disappointed to let Spartans back into the game after an uncharacteristic Gerrard type error in midfield allowed them to work a simple finish. H-T 1-1, we brought on Resco for Scotty, Hymsey for Sam, Yin for Baz and Ben for Kieran C. Despite the multiple changes, we settled well and soon went 2-1 up after Kieran M’s cross from the right by-line was swept in by comeback kid Hymsey. Spartans started to take a bit more control and scored twice in quick succession mid-way though the half: first from a penalty for handball after we had given up cheap possession; and then more controversially after Newley tipped a header onto the crossbar and their player had a simple tap in, with the linesman’s offside flag being ignored by the referee. With one last throw of the dice we brought on our other aging comeback kid Steve for OB at LB. There was one final controversial episode to come after Thierry took exception to their star player “connecting” with him on the ground, which resulted in a melee involving a number of players on both sides. The referee was obviously keen to avoid the paperwork and tamely opted to give the Spartans player a yellow card. A disappointing ending to a game that had been keenly and fairly contested by both teams