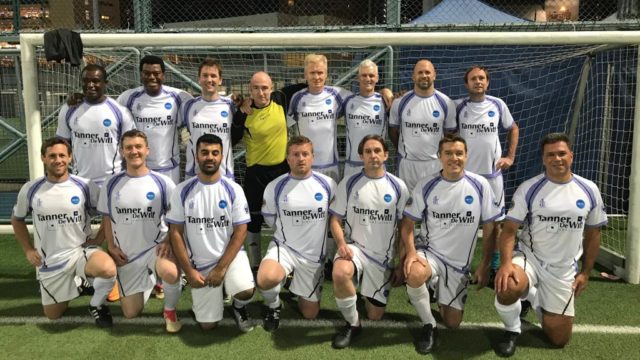 This was a rearranged cup game. With a strong squad DBFC Vets went into the match desperate to secure the first win of a difficult campaign. DBFC Vets set up in an attacking 4-4-2 with Steph at front supported by Akosah, a season debut for Sam on the right with Scotty offering more support for the attackers on the left. At the back experience was the key with Gazza, Pedro, Neil and the youngster Morse giving DBFC Vets at least 200 years of experience across the back, combined with keeper Dave Bradley we may have had a quarter of a millennium back there. The game started with HKFC putting DBFC on the back foot from the off with some slick passing and overlapping play down the DBFC right. Against the run of play though DBFC launched a superb breakaway attack with a combination between Akosah, the HKFC centre half and Steph ending with Steph scoring coolly when one on one with the keeper. After this the first half was quite a scrappy affair, DBFC facing wave after wave of HKFC pressure but we were never genuinely threatened thanks to the sterling work of the young lads at the back, particularly goalkeeper Dave Bradders. DBFC had another great chance against the run of play with Matija heading a cross over from 1 yard out to see the sides go at half time with DBFC leading 1-0. Half time saw Gazza come off; some would argue a turning point in the game. HKFC started quicker and pressure told quickly on the DBFC team with a mistake leading to the first and second goals. After this fatigue and a resolute HKFC defence stopped most meaningful attacks from DBFC. HKFC scored a third breakaway goal to kill the game and at full time it was another disappointing defeat. With the managers head firmly in the noose and a 0% record, drinks after the game at the Pier Bar were a fine chance to reflect on what could have been. Next up for DBFC Vets is another tough fixture against the unbeaten Godfathers team.

MOM: Dave in goal, kept us in it during the first half and could do nothing about the goals.

DOD: Gazza, only played one half, (some wondered) if could have done both.