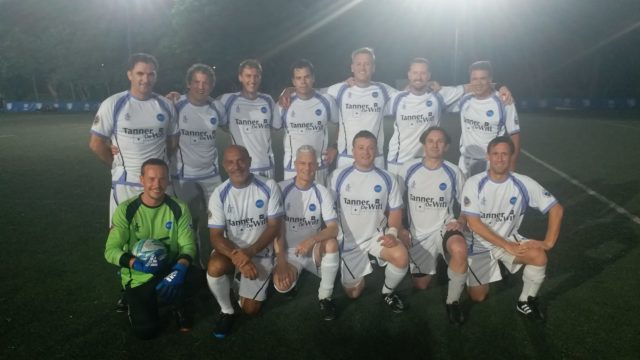 This was our first game of the season, a real baptism of fire against a very strong Godfathers side who had recorded a 9-1 win the previous week. With a number of new players to integrate into the squad we opted for a simple 4-4-2 initially with the hope that we could take the game to the Godfathers. Craig and Neil began in the centre of defence with Steve and Morse alongside them. Pascal and Thierry in centre mid with Michel and Kieran on the flanks and Jamie up front with Scotty. DB started very sluggishly, and we were quickly punished for sloppy mistakes and not retaining possession, the first goal came from losing the ball in in midfield after our goal kick, a quick break from the Godfathers side saw DB one goal down within 5 minutes. Things did not improve in the next ten minutes as three more goals flew past a helpless Toni. With twenty minutes on the clock and the DB continuing to be overrun Pedro replaced Steve to steady the defence. Tactically we changed things up; William who was delayed in arriving was bought on to make a three in central midfield, with Kieran asked to take on the lone striker role. The game began to even up a little and a late penalty converted by Thierry, given after a clear foul meant that DB went into the break 4-1 down. The second half was a much more even affair, lack of fitness and injuries began to take their toll on the DB players with Craig, Scotty and Jamie needing to sit out the remainder of the game. As the tiredness took its’ toll Godfathers scored two more goals utilising their fast-breaking wingers. In the end a 6-1 defeat did not feel as bad as we feared after twenty minutes, however it is clear there is some work to be done if we are going to be competitive in the league this season. The new lads played well on their debuts with Neil Mac stepping up to boss both defence and midfield as the game wore on.

MOM: good shift by Neil Mac, good organising at the back, steady on the ball and a combative presence in midfield.

DOD: Steve, first game as manager, gave away the ball for the second goal, picked the wrong formation to begin with.