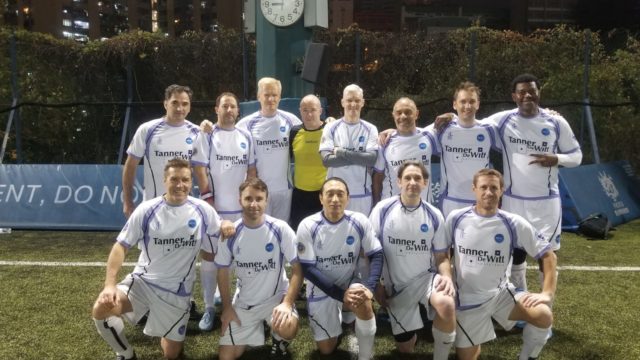 The first game of the new year and DB were hoping to continue our good form after the shock win over Godfathers in our previous game. Unsure what to expect from a KCC team who had experienced a mixed bag of results DB set up with a 4-5-1 hoping to control possession with a strong central midfield trio of Pascal, Steph and Neil. The game began slowly with both teams struggling to retain the ball, DB taking a while to adjust to the dimensions of a small pitch. Gradually though we began to assert our dominance over proceedings with control beginning at the back with Morse and Thierry effortlessly sweeping up, supported ably by Gazza on the left and Travis on the right. With around 10 minutes played DB’s dominance was rewarded, Steph picked up the ball from Ben on the right and volleyed a delicious shot into the bottom corner. KCC conceded a second soon after, Steph picking up a loose ball and firing in a long shot putting which put DB firmly in control. Following some changes DB kept up the pressure on the KCC goal, a third followed with Pascal backheeling in from a low cross to put DB out of sight. Before half time there was time for one more goal, Minga with a good headed finish from a corner. As the second half began DB’s dominant performance continued, Steph rounded off his hattrick form the penalty spot, two own goals after good pressure from Neil Mac and a final goal, DB’s 8th, a well-taken finish by Amin. The game finished with DB in dominant form, potentially we could have had more. Unfortunately, with results elsewhere going against us this game marked the end of our involvement in the cup, however a great start to the new year, hopefully this upturn in form continues in the league.

MOM: Steph, a near perfect performance, the big man thoroughly deserved the match ball at the end.

DOD: Jamie, star striker who missed out on a ton of goals because of a late work call.