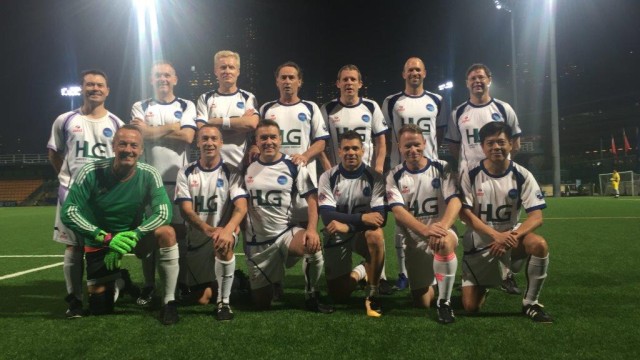 A well deserved win for the 45s and always a great start to the weekend to win at HKFC. After our heavy loss last time out at HKFC, we were keen to put on a better showing and raise the profile of the 45s. Matija and Kieran McK kindly guested from the Vets Youth Team but otherwise we were a legitimate bunch of old men (Kieran Chan announced his 45th birthday 3 months early and spent the afternoon at the hairdressers putting in grey highlights). We started the game confidently against a Gazelles side that had plenty of younger guys in their ranks, notably a big 20 something goalkeeper who would soon get well acquainted with our CX flyer Kieran McKnight .Kieran gave their defence a torrid time from the off and had several chances to score in the first half .But first blood was drawn, with HKFC stunned into silence when Hymsey found himself in space on the right wing and crossed for Collier to leap like a salmon and direct a well placed header beyond the reach of the keeper. After this we grew in confidence and should have put the game out of reach .Second blood was drawn after20 minutes when Steve did a last ditch slide tackle to deny their right winger a scoring opportunity but took a boot in the face and had to go off to be patched up. As planned we started rotating with Neil coming on for Steve and Martin for Gazza . A 6 minute gap in the commentary now occurs until Steve joins reluctant sub Gazza on the bench .It was more of the same for the rest of the first half, a highlight being Hymsey trying to recreate glories of his youth with a free kick from the edge of the penalty area with the outside of his foot-goalkeeper had time for a cup of tea and duly saved .Goalkeeper and Kieran were then back in the headlines as Kieran was cynically hauled down in a 1 on 1 as Kieran got behind the defence. Kieran not amused when referee told him that it was not a red card as it was Friday night football. ( DBFC defenders take note for future games.) And so to half time –one team talk by Steve ,urging us to bring our wide midfielders a bit deeper and give Kieran more space to exploit up front. A second message from Gary saying exactly the same thing – but no one listened to either.

In the first part of the second half we got a bit scrappy , not helped by our repeated rotations in order to make sure all had game time. Steve came back on for Kieran Chan and Neil moved to RB. Gary came on for Mike and pushed Martin forward to LM and new trialist Stuart came on for Hymsey. Although we were not as fluent, Gazelles never gained the ascendancy. Matija was excellent and decisive and organized an otherwise Over 55 Back 4. Paul and OB kept things ticking in the middle of midfield and protected the Back 4 from a number youthful runners . Stef earned his appearance money with a save from distance that he pushed against the post. We got a little bit too nervous for the manager’s liking and made some changes to tighten things up for the final 15,with Barry and Mike supporting our CM duo . But we held out with no great dramas and adjourned to the bar for a well earned beer. As always a very enjoyable Friday night at HKFC and our thanks to them for their hospitality. Roll on 23 February and a return to HKFC to play Rovers.

MOM: difficult to single out any individual. Kieran McK would have won by a country mile if he had finished off a couple of his chances. Matija dominant at the back and always managing to step in front of their CF to break up the play when Gazelles pushed forward. But the award goes to the CM pairing of Paul and OB who kept us ticking over with good possession and kept our shape.

DOD: minor indiscretions only. Gazza , who stresses the importance of a timely arrival, still not kitted up 5 minutes before KO. Collier, not happy with bench time. But the award goes to Hymsey- with 2 minutes to go and Gazelles on the offensive, strolling off with a dodgy hamstring , with most of us thinking he was just doing his normal run to the wing.