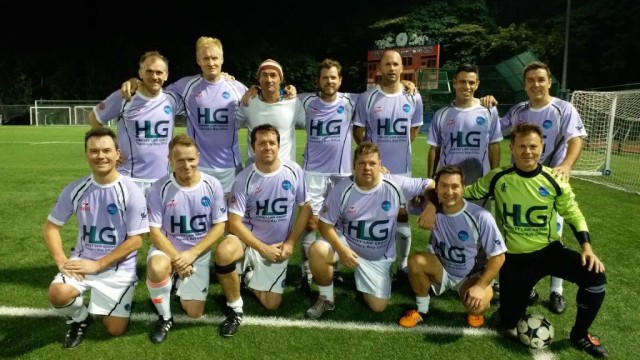 We went into this game with some confidence, with a squad of 15 announced on Wednesday morning and having established some ground rules with Spartans that 40-45s would be limited to 2 per side. Despite our meticulous planning, we had 12 players ready at KO, with team shirts arriving at 8.29p.m. We than faced up against a Spartans squad whose numbers had gone up during the day from “the bare 11” to a squad of 15 that included no shortage of younger players from their Legal League teams. After a minute’s silence for Robin, we started the game brightly and it was an even contest. We un-intentionally played an aggressive formation, with generally at least 4 strikers whenever we lost the ball moving forward. Spartans drew first blood after 20 minutes, with a shot from close range, shortly followed by an equalizer by our Vets youth team striker Moti. We then went in front as Moti ran on to a ball from Gazza and hit a speculative cross from the left wing that looped over the goalkeeper’s head. Spartans equalized and we went into the break at 2-2. Perhaps inevitably, we ran out of legs a bit during the second half, with Hymsey and Dirk going off with knocks and 11 men left standing. Spartans scored what turned out to be the winner mid-way through the 2nd half via a cross from their right wing – Matija (forever a striker at heart) heading the ball towards goal and Gazza handling on the line. Everyone stopped for a penalty and a red card but one of their guys was quick to play the advantage and knocked it in from close range. Gazza survived. Gianluca kept us in the game with a worthy save diving to his left to push away a good strike. We pushed hard to equalize, chances falling to Moti and then with a couple of minutes to go, Jeff. But it was not to be and we go to our next game on 8th December against USRC, wondering who was foolish enough to say “you can’t win anything with kids”.

MOM: a number of contenders, most notably our OAPs Gazza, Mike C and Martin S. Not long until we can get to these away games on our bus passes!

DOD: once again some superb off-field contenders. Steve for getting half way to Tai Tam before realizing he had left the team shirts in Central; but the award surely goes to Bazz Brown who was last seen waiting for a taxi at DB North instead of meeting the rest of us at Central Pier 3.