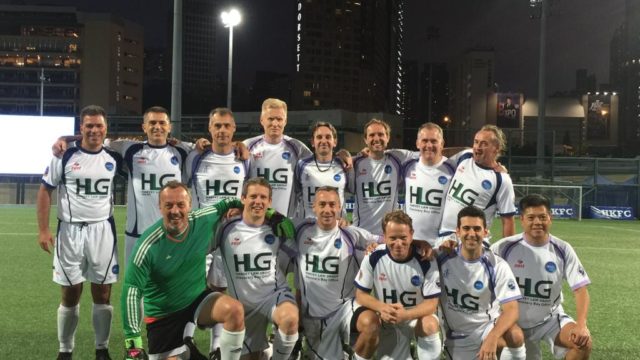 This was not the trouncing that the score line suggests. Aside from the second 20 minutes of the first half, we were competitive and, in much of the second half, had the upper hand. Dynamics were short of players for this game and at the last minute drafted in a few young lads, including the Yau Yee Division 1 top scorer. We set up in a 4-5-1 because we were aware that Dynamics always push hard in the first 20 minutes (and partly because we only had one striker on the squad list, Kieran McK (finally 45)). Dynamics scored an early goal after 10 minutes before we had settled but Kieran equalized soon after with a well taken finish when through on goal. We then struggled for the remainder of the half, going in 1-5 down at half time: a couple of defensive errors, a couple of well taken finishes by Dynamics. However, we were not despondent at half-time and were determined to keep the score respectable. Dynamics took off two of their younger players at half time and we started to compete more evenly, with good possession generated by Kenny and O’B in central midfield, and Kieran always a threat up top. Hymnsey rolled back the years with a couple of decent finishes: the first controlled on his chest and hit past the keeper from short range, the second a far post header. Kieran hit his second but Dynamics always kept 3 goals between the teams with 2 goals of their own. By the end of the game we had forgotten about the first half and adjourned to the bar in high spirits.

MOM: Kenny, unfortunately only in town for the week, showed a lot of class (all learnt in the Spurs academy); Kieran was a one-man strike force for the entire 80 minutes and was unlucky not to score more than 2.