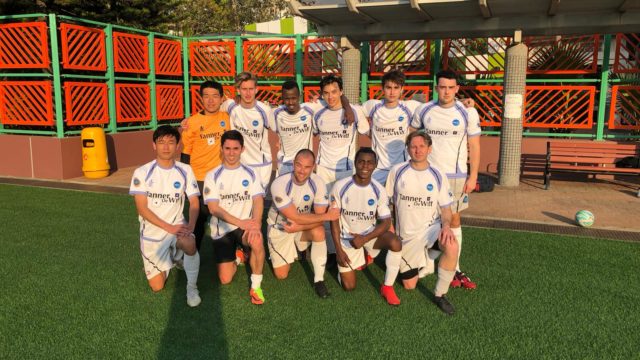 DBFC went in to Saturdays game against Goodfellas with nothing but 3 points on there minds. Perfect conditions on a brand new pitch with a full attacking line up should have meant an easy 3 points for the boys in white.
A few shaky passes in the opening 20 from the DB back line and midfield signalled a game that might be tougher than anticipated. Whilst the quality was on the pitch, the balls weren’t quite finding the feet and the energy and tempo seemed to be missing for the first 45. Ben returned for his first game of the season and slotted in to right back, having an outstanding first half and provided multiple chances that should have been buried. Kafi had the best of the chances and could only manage to hit the crossbar, while a near scare at the other end saw Goodfellas blaze over the bar from 4 yards out. Half time rolled around quickly and DB were in a comfortable frame of mind knowing they had the squad to put in multiple goals and it was only a matter of time. The second half started with a much higher intensity and Gabe had a couple of free headers 6 yards out but put them both wide. Kafi missed a great one on one from 2 yards out (yes that’s correct!) and Ethan couldn’t find the target on a few occasions. With frustration starting to build through lack of goals, the Goodfellas were presented a gift with 15 mins to go through a defensive error. The Goodfellas striker picked the ball up 30 yards out and strolled in on goal to square it to his partner for a snatch and grab 1-0 lead. DB never recovered from the shell shock and whilst they continued to press, the energy had dried up and the balls were not sticking where they needed to. Full time came and every player knew they had just let slip one of the most dominant games without scoring a goal. Tanner de Witt man of the match went to Ben Roberts for a brilliant first game back where his class and fitness shone through. Christmas drinks to celebrate the half way point of the season were enjoyed at our other sponsors bar – Pier Bar and some sore heads were felt on Sunday morning.