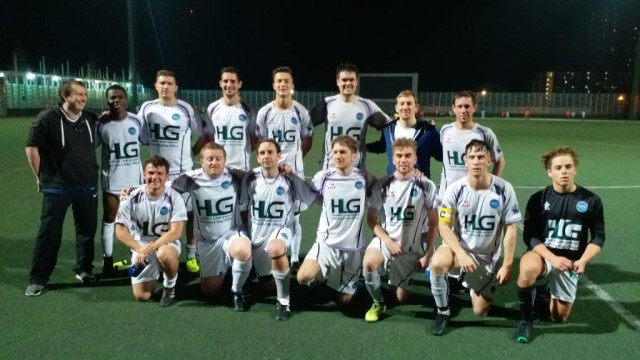 DBFC were gutted after losing this one as it was a great defensive performance against a very good attacking side and DBFC thought they had done enough to win. This was the game of the cup contest as the winner moves on to play a second division team in the semi-final and probably final.
It was nice footballing weather when most the DBFC team got to the pitch early for a decent warm-up. The team talk highlighted that this was going to be a battle and the will to win will prevail. We knew the Forward attack and midfield were formidable and could be given no room to play. A 100% work-rate was required to close them down quickly and always be first to the ball. The Forward defence was known to be not as strong so there was a good chance to get a goal. Gaffer Gaz saw this game as a 1-0 win for DBFC.
The game started with Forward largely controlling the game, but with little reward for their efforts, with the DBFC defence and midfield restricting them to long shots. Some good tackles from the back four and a good offside line continued to prevent Forward getting close to our box. Anything that came Yanou’s way was mopped up like usual. This strong base allowed us to start getting some attacks going, with Kieran and Pascal in the midfield able to link up with the wide men and Matt and Ingham up front. DBFC started to create several chances and Forward were lucky to get a few blocks in on shots from Matt, Kieran, Mac and Ingham. Forward had one last chance with a free kick before half time which cannoned off David’s head in the wall. However the last 20 minutes of the first half belonged to DBFC.

The half time team talk was positive, with manager Gaz happy with the half and praised how everyone battled and kept to the game plan. The same needed in the second half and reward will come.

Second half started with DBFC controlling play, Jamie Bone who had come on for new boy Mac, was strong down the left, and DBFC were passing the ball very well. The pressure soon told with Matt Orr intercepting a rushed back pass from a Forward defender and he calmly slotted it past the keeper.

DBFC kept up the pressure but were soon pegged back with long balls from the high Forward defence as they pressed for an equaliser. The DBFC defence were solid and cope with it all but unfortunately on of these long balls was misjudged and went over the top evading Rodders, Christian and an out-rushing Yanou to drop in the box and despite a saving tackle by David on the Forward attacker in front of an empty goal, the ball squirmed high in to the air and bounced wide of the DBFC goal only to fall luckily to a second Forward striker to slot in from a very narrow angle.

The last 15 minutes Forward had the upper hand, pressing with the long balls to find the winner but the DBFC defence coped well. DBFC should have done better exploiting the opportunities that the Forward high line gave for a counter attack. However, the DBFC forwards didn’t have any luck with the last pass through. A couple of half chances came DBFC way, especially with Ingham working his socks off to get the break. In the very last minute Ingham challenged the Forward centre-back and the ball fell back for him to chase on to goal but he just couldn’t get his foot to stretch out far enough and make good contact and the ball went wide.

The game ended with penalties and Forward scored all of theirs. Christian Romano being the unlucky one by hitting the cross bar with his penalty. It was a heart breaking way to lose after a commendable team performance.

MOM: every player was worthy of this award having gave 100%. Nonetheless, this week the manager’s shout goes to Christian for getting to just about everything in the Centre-Back position, his first time there this season. Christian and David was a formidable centre of defence pairing with trusty side-kicks Rodders and Morse completing the solid DBFC defence. A defence that was very grateful for the dynamic, never stop, never surrender duo in centre mid (Kieran and Pascal) breaking up the Forward play.

DOD: Not a day for this award although great efforts were made to find a reason to give it to vegan Rodders. However, an unfortunate recipient and cruel award in some ways but it needs to be recorded as a DOD moment, Christian for missing his penalty. This must be a first where a player gets MOM and DOD in one game.

A good crowd at the Pier Bar afterwards to quickly drown the upset at being knocked out the cup and get back the happy banter with the help of a few tequila shots dished out by Judge Ingham.