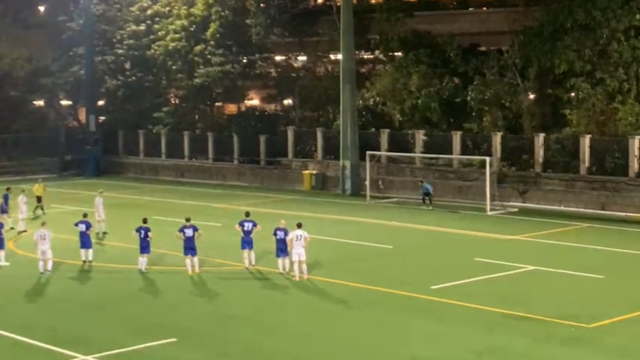 A new type of match report this week, spicing our usual format up! Brendan’s take on things below:

Firstly, I have absolutely no appetite to write this after what was a pain of a defeat.

The game started with the home side marginally on top but as the minutes moved on DB began to assert more influence on the game culminating in a chance for Zoeller, from a great ball in which he attacked with conviction, sadly, his feet turned into wet fish and the chance went begging. Travis then saved well over the bar and more and more chances were being created by both sides.

Ethan began to show glimpses of his potential and missed a chance at the near post before Marco also missed with a first-time effort. DB were asserting themselves more and more which led to an increase in foul play from the home side. This was somewhat countered by Travis who decided to push the opposing centre forward over because he had the audacity, nerve and cheek to do something as outrageous as chase down a through ball. Anyone familiar with ‘round the back of Batley Frontier on a Sunday Night’ will know exactly how he went down.

As the first half came to an end Steve and Matty were running things in the middle of the park which led to some awful tackling from the home side and weak refereeing. All in all, a first half which should have yielded more for DB but the game was very much still there for the taking.

My notes for the second half run as follows:

A case of coulda, shoulda, woulda for DB: the type of game that is perennially frustrating. Let’s hope our season isn’t like a cat in a bag, waiting to drown and go at them next week like a bagful of cocks.

We go again next week.