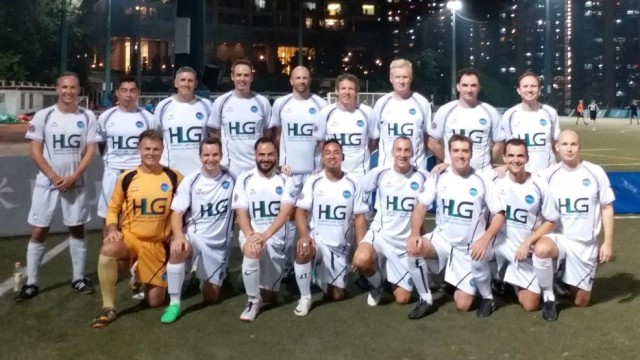 DBFC had a big squad out for this game (17 players) and started very strongly, passing the ball comfortably and penetrating down the flanks, particularly the right. Chances were falling regularly to Kieran, Rafa, Dom, Rudi and even Baz Brown getting into the box. After 15 minutes the pressure by DBFC paid dividends when a ball into the box was not cleared by a KCC defender at the front post and Kieran McKnight collected and fired in across the goal from a narrow angle to put DBFC 1-0 up. DBFC continued to press but the second goal was proving difficult past a good KCC keeper. The Game was getting stretched and KCC were getting some joy on the counter attack. At about 20 minutes Zin twisted his knee and had to be replaced by Steve W and 5 minutes later Gianluca was signaling to come off with a calf problem, so on goes Alessio into goal. 10 minutes before the break a good one two between Kieran and Rafa sent Kieran charging into the KCC box to blast a shot at the near post , which the KCC keeper covered well only for the ball to come out into the middle of the goal box for Dom Polisano to side foot in from 8 yards out. DBFC 2-0 up at half time. The second half saw many changes for DBFC and it appeared KCC made many changes to what appeared to be slightly younger mobile players. Whatever, changed is up for debate but the second half was mostly KCC pressing the DBFC goal for the equalizer and DBFC not getting to hold the ball for long going forward. The DBFC defence had to work hard for their crust but battled well to keep KCC out, with one particularly good save from Alessio 5 minutes from the end. This was a good business like game from DBFC to win 2-0 and keep their 100% record. COME ON DBFC!