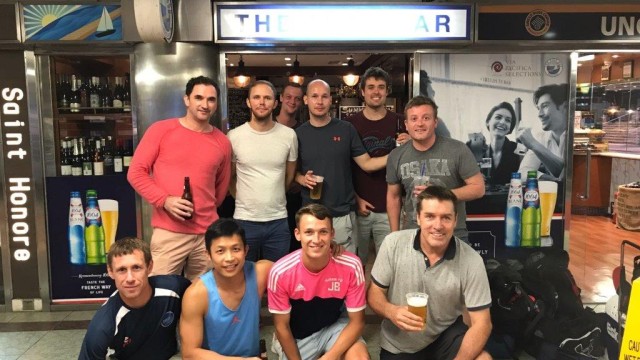 This being a must win game for DBFC to keep clear of chasing FWD and keep the title hopes on track, DBFC were in confident mood.

The first half started well with DBFC in control, but missing a number of chances. We were passing well around the back and Darius hit the post after some good work from Robbie.

Riggers came off injured after about 15 minutes and on went Thierry at CB.

The first goal came after about 25 minutes, immediately after Rob Scott came on to give Zol a break. Darius had made good work down the right and won a corner, which Robert Scott took (instead of JB) and put in a great in-swinger to the back post where Robbie out-jumped the Spartans defender to loop the ball over the Spartans keeper and in to the net.

The second goal came not long after Danny Loup came on to give Pascal a break. Danny released Robert Scott down the left wing and he skinned his man, ran into the box and squared to JB for an easy tap in.

JB came off for Scott Holmes.

The second half went well with a lot of good chances for DBFC, and not much going Spartans way – other than a few long shots and some corners, from which Spartans are always a threat.

DBFC players were rotated, with players going back on to give everyone good game time

The game could have been a lot more goals for DBFC but luck wasn’t with us and the crowd watch DBFC confidently close out the game. Those on the sidelines were given the extra entertainment of watching a few (now rather common) Zoeller tantrums.

DOD: Zoeller for being Zoeller.