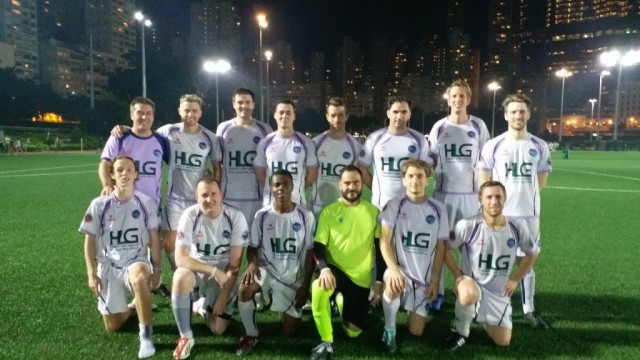 We struggled to get a team this week and matters became worse when Yanou hurt his thumb and knee in training. Fortunately, Alessio was able to adjust arrangements to be available as back-up. A late fitness pass by Dan Lye and the last minute return of DBFC’s prodigal son, the legend that is Zoeller, bolstered the numbers to a healthy 13 players. Mind, at 6:30pm we only had 10 players at the field for kick-off, so manager Gazza was changed and booted ready to go on but Darius showed up in the nick of time. Dan K and Rolph showed just as the game started (hence subs).

The team talk had emphasized that the small size of the pitch meant that there would be no time with the ball and fast passing and movement was required. Throw-ins would be more dangerous than corners and we had to defend tightly for these but try and utilize the throw opportunities to score at the other end. Keep a tight formation at the back and close down quickly.

The game kicked-off and DBFC took the upper hand to press the MES goal. MES were using long ball to counter and they looked most dangerous from throw-ins with big players in the DBFC box. Thierry and David were very busy but kept firm and strong. After 15 minutes Zoeller anticipated a back-pass from the MES defender and ghosted in to intercept and take it round the keeper, a little further than he wanted but still managed to fire it in from a narrow angle and put DBFC 1-0 up.

DBFC continued to play forward and Steve Lang had a couple of decent shots just off target and Pascal had a shot blocked in the MES box. Che always looked threatening running at the MES defence and a couple of attempts by him were blocked by a packed defence. Nathen was struggling with his hamstring so came off for Rolph to see out last 10 minutes of the first half at left back. DBFC just couldn’t get the second goal and a MES counter-attack in the last 2 minutes of the first half resulted in a throw-in. Again this was fired into the DBFC box and again Thierry got his head to it to head clear but a MES player was first to react and got a shot away from edge of the 18 yard box that found a way through the packed box to hit the post and rebound into the DBFC 6 yard box at the feet of a MES player following up. Immediately after the restart the referee blew for half-time with the scores at 1-1.

At the half-time review everyone was reminded that this game, on this tiny pitch, was only going to be won by the odd goal. So keep shape and high work rate and quick passing moves. Zoeller moved to RM to cover for Darius who had disappeared for the toilet. Rolph went to CF and Dan K came on at left back while Che moved to LM and Pascal went to his usual CM with Dan Lye moving up to the no. 10 spot.

The second half kicked-off and again DBFC took the upper hand. Che was pressing down the left and Rolph running down everything up front. After 10 minutes Pascal got a knock so came off for Darius to come back on at RM and Zol going to no. 10 while Dan Lye back at CM. It wasn’t long before the DBFC pressing got deserved results when Darius took the ball down the right and checked to play in an overlapping Zol, who got to the by-line and drilled a low cross into the feet of Rolph who had perfectly timed his run towards the near post to turn the ball with pace into the roof of the MES net. With 20 minutes left on the clock DBFC were 2-1 up.

The remaining 20 minutes saw DBFC keep a compact back four and defensive midfield. MES were pushing forward for the equalizer but leaving themselves vulnerable to counter attacks. MES got a series of silly free-kicks awarded and a lot of throw-ins outside the DBFC box. In all cases they got all their big men in the box to see if they could get something from headed balls. The DBFC defence and midfield were working hard, particularly Thierry and David with defensive headers. Pressure was on and DBFC soaked it up and had fortune on their side when an attempted headed clearance by Thierry went the wrong direction and hit the DBFC goal post then bounce across the goal line to hit the opposite post for Rodders to boot clear. There were 3 of 4 great opportunities for DBFC to capitalize on the counter but shots just wide or heavy passes resulted on failure to convert. DBFC managed to hang-on for the win but not without the fireworks of Che being sent off with 3 minutes to go for being “silly” by tapping the ball away on a MES free-kick when he knew the referee was an idiot that had taken a dislike for Che. A lesson for the young super-star that is going to cost him $500 fine and he’ll need to work overtime at the Orange Tree to collect more tips.

MOM: A shout for Alessio who stepped in late to cover for injured Yanou and played a tidy game in goals. Thierry strong at CB and Steve strong in CM. However, following on from last week’s good performance, Rodders again stepped in to cover at RB and played a strong tidy game (watch out Ben and Simon).

DOD: If Thierry had managed to score a headed own goal this would be for him and his little French wing man (Pascal) waking everyone at 4:30 am with his WhatsApp messages was a close call. However, for winding up the referee and getting a red card with 3 minutes left for kicking the ball back, the award (once again) goes to our young Dutch red head “Hard Man Che”.

There was a good turn-out at the Pier Bar after with a number of DBFC members who were not playing today putting in an appearance; Scott Holmes, Matt H, Robbie and Syd. 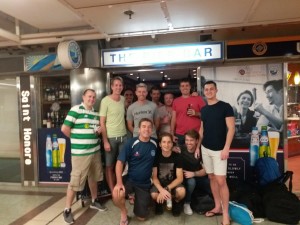