The early kick-of times always cause DBFC a bit of a problem, notably with Jordon and Darius unable to make it because of work and Christian and Matt H only making the second half because of work. Robbie was available for the first half only and Pascal came along knowing he had a potential hamstring problem. So the game ended up being a well-planned relay, with swaps in and out.

DBFC started very strongly and were dominant going forward with Robbie controlling things up front and Kafi and Crommy playing off him with pace. Crommy had a great shot come off the base of the post after only 5 minutes of play and should have scored with a few really good chances. However, DBFC first goal came from a corner for Thierry to rise up and connect with a powerful header while fending off the aerial challenge of the Spartans CB. The second goal by Robbie followed excellent play by debutant CB for this season’s legal league team, Matija. He intercepted a Soho pass at the edge of the DBFC 18 yard line , dropped his shoulder to skip passed a Soho midfielder and drove into the Soho half before threading a defence splitting pass with the outside of his left foot into Robbie who had ghosted in around the back of the Soho defence. Robbie kept his cool and shot passed the out coming Soho keeper to the far post and into the net to put DBFC 2 – 0 up after 20 minutes. DBFC continued to press and missed some great chances. At about 25 minutes played Pascal’s hamstring didn’t hold and he was replaced by Josh. Robbie came off after 35 minutes and Christian came on into midfield pushing Crommy up top into Robbie’s position, alongside Kafi. The last 5 minutes of the first half Soho Spartans seemed to be getting the upper hand.

The second half started with Will replacing Charlie at left back and Matt H replacing Danny H at centre mid. Whether or not the change of players was disruptive to DBFC flow of football is open to debate, but it was Soho Spartans on the ascendancy and threatening to score. There were a number of desperate defence clearance and good work by Ricky in goal. DBFC had lost shape in midfield and the DBFC defence was sitting too deep. Soho were awarded a very dubious penalty but Ricky pulled off a great penalty save from Soho’s top goal scorer Li Yongsen. This escape for DBFC didn’t inspire a wakeup call and after 15 minutes of the second half Soho scored with what seemed a fluke. A pass by the Soho midfielder through the DBFC back line into the 18 yard box was in the path of the Soho forward but Thierry did enough to prevent the Soho forward making contact with the ball but this fouled Ricky who dived one way to make a save while the ball trickled through the other way into the corner of the DBFC net. It was 2 -1 now and Soho was up for taking something from this game.

Soho had brought on a big forward and was resorting to long ball tactics, pinning DBFC defence back and picking up on second ball to run through the line. It was working for Soho and DBFC were under constant pressure. A change in the DBFC set up was necessary and Josh came off for Danny H to go back on to make a 3 centre midfield with Christian and Matt H, Kafi moving over to the right and Crommy being the lone CF. This definitely tightened things up and got things back to even. However, Soho was still pressing and DBFC giving away silly free kicks outside the 18 yard box that Soho wasted with some wild shots. DBFC looked threatening on the break but still it seemed Soho had the upper hand. After 30 mins the game took a turn when a Soho corner came into the box looking for the big men and it was punched clear by Ricky. However,  Matija was squaring up to the Soho big man after he had thrown a punch that missed him and in the Melee that followed , the Soho player punched Kafi in the eye. The referee showed the red card and Soho were down to 10 men. Credit to Soho, even with 10 men they pumped the ball forward and looked threatening to the DBFC goal. However, DBFC were getting more joy attacking and should of scored their third goal on a few occasions when clear through. Kafi hit the bar square on from a great free kick. The game finished 2 – 1 and DBFC were relieved to have the 3 points in a game they should have put well out of Soho’s reach in the first 30 minutes.

8 of us made it back to the Pier Bar, except of course our young superstars that are only 16 (or just turning). Charlie’s dad and mum checked in to make sure Charlie hadn’t sneaked in 🙂

MOM: Some very good performances, especially from Matija and Robbie and a great headed Goal from Thierry. However, the honour goes to Ricky for not only a penalty save but a number of other saves and some vital punches / hand slaps to cross from corners.

DOD: Thierry was in the frame for giving away the penalty but after deliberation and despite his tireless work on the pitch, this honour goes to Crommy for missing at least half a dozen great chances that he normally pops in without hesitation. 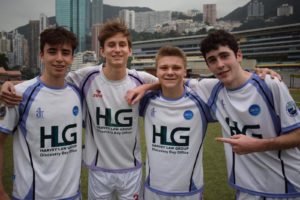