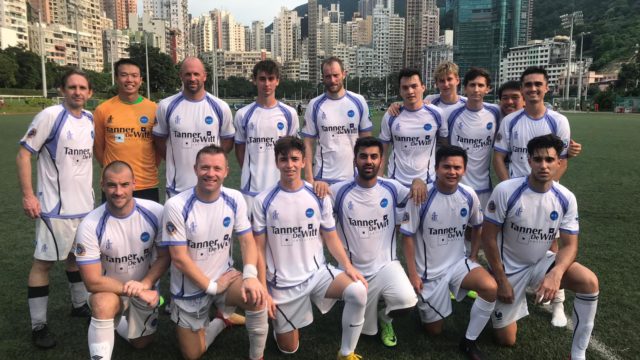 DBFC entered RD 3 in a must win game to stay in touch with the top of the league. Up against corinthians, the task was never going to be easy, although DB had maintained its attack minded squad from the week before with youth and pace on our side. The first 20 mins saw the DB midfield of Thanos, Gabe and LT get on top early and wore the Corinthians midfield down, however the final ball up front was missing and it seemed the needed goals would elude DB again. Last years golden boot – Kafi, was brought on to inject some pace and spark and the impact was immediate. Some quality ball play from Charlie and Thanos lead to a break down the left and a corner followed. The tall timber of Thierry and Dan pushed forward along with the dangerous Thanos and the aerial threat became very real for corinthians. A superb corner from marcus found Thierry unmarked at the back post and he thumped his header in to the back of the net to go in to the break 1-0 up, albeit with corinthians having the better of the chances for the first half. The second half saw a re shuffle in defense with Alex pair up with Dan in the middle and LT shift to right back with Marco stepping in to the centre midfield role. The team seemed to gel instantly and possession swung heavily to DB and we controlled the tempo and game from the outset. LT found is rhythm on the right and was causing nightmares for there wing, continually whipping in quality balls for Kafi and Marco to pounce on to. Enzo was making some great runs inside the wing and looked like he would open his account a few times if it wasn’t for some quality keeping from corinthians. Before long, Marco picked up the ball out wide and played a lovely long ball for the advancing LT up front. The keeper came charging out and LT’s presence put the keeper in two minds and the ball sailed in to the back of the net. 2-0 up and DB were cruising to victory. Thanos, Marco and Gabe continued to dominate the midfield and Kafi was being fed some quality balls throughout the second half. With about 20 mins to go, Marco picked up the ball inside the box and jinked in and out drawing the attention of the corinthians full back who had no problems in bringing him down in the box. Kafi steppes up and calmly slotted the penalty to make it 3-0 and put DBFC in a commanding position for the last 20. DB took the foot off the gas with 15 to go and had the beers back at Pier bar in mind and couldn’t not find a 4th. Game finished 3-0 with Thanos and Marco both having a dominant game in the middle of the park. Shout out to ricky and Kasper who pulled off some great saves to keep A clean sheet and lead the way for HKs top keepers in the league. Thanks to the DB boys who came down to support even though they had games of their own to get to – the squad appreciated it. Looking forward to chalking up another win next week and taking back top spot in the league