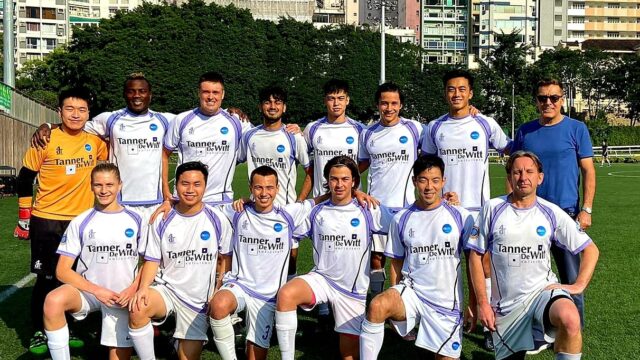 Once again DBFC struggled during the week to confirm a full squad for this game, ending with confirmation of 12 players by Friday afternoon but fortunately 14 players on Saturday morning. A strong squad indeed.

Morse got the warm up going as per, with some extremely complex warm ups, that even got those of us with Master degrees confused. Nonetheless, we were all warmed up and ready to go. We knew this was a must win game, and we knew the opposition was bigger than us, so all the talk pre game was to not let our heads drop if things turn against us and to keep playing.

And, also, that James and Makito were to be like “lovers” in the centre of midfield – never drifting apart.

DBFC started stronger, with the majority of the ball and playing some good football. But HK Scottish were always a threat and had some very good players, especially towards the front. “Jamesito” as our new centre mid partnership is now called (we can all thank Leo for coming up with this), were bossing it with tackle after tackle. In fact, best comeback of the season goes to James – upon being called a 3 foot tall garden gnome, James simply responds “well I am still winning all the headers against you”. Off the opposition striker shrugged away, to think again.

Big Zee was holding the ball up well and Tita was bossing it at the back, and Morse was playing well too – being the man to ensure all the complaining to the ref wasn’t entirely done by the other team.

Our first goal came from a long ranging through ball from Tita (also called a clearance), that was expertly controlled by Krisna on the half way line, who then destroyed the centre back for pace and slotted the ball home. Krisna running off with his customary celebration, “shooshing” the imaginary crowd – in this case a few blades of grass on the racecourse. Good goal.

The lead didn’t last long though. You know it’s a penalty when even Morse doesn’t object! Thinking he was Chuck Norris, Morse tried to blast the ball out of Happy Valley, but unfortunately kicked their guy. It happens! Ricky beaten and we go in at half time 1-1.

Half time team talk was positive, we kept the team the same for the first 10 mins.

HK Scottish started the second half stronger, having a chance or two and then hitting the crossbar. From the next phase of play, Makito-san tackled their man in midfield and put a great ball through to Senor Korani, who cut inside and blasted past the keeper.

After going ahead we brought on David for Morse, anticipating the increase in long balls as Scottish tried to get back into the game. Nick and Darius also came on and the chances for DB started to come more frequently, whilst at the back we were solid like a Tita shaped rock.

Benji made the game a lot easier to see out with a great strike and see it out DBFC did.

Ryan – we are lucky steroids are not banned in the Legal League, as I am pretty sure Ryan was on some sort of performance enhancer. Best game he has ever played.

Jamesito – The dynamic midfield two did not let them rest.

DOD: Krisna, as usual, is always a contender. Keeping the pitch onside for Scottish by forgetting to roll off the pitch when injured near Ricky. Despite Leo shouting “Krisna get off the <insert expletive> pitch!” Krisna’s walk to the sideline was also interesting.

Ryan – for misplacing the ball in the plants, and making the other team blame an innocent David for time wasting.

Nick Bradley – for missing a one-on-one.

Chuck Morse-is for the pen

And lastly, Mr Darius. Darius was late and was telling me a great story about how our team likes to introduce ourselves to the goalkeeper before shooting as we like to get so close. Well – Darius did exactly that when he came on, trying to dribble closer and closer with an open goal to find the perfect moment.

Great win everyone against a solid team. On to 2022 – and hopefully Morse will buy his share of the beers this coming year.