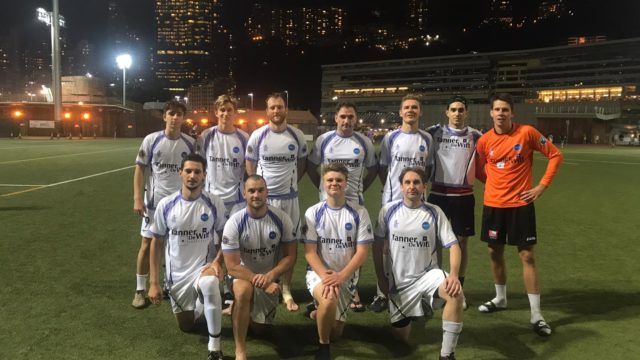 DBFC came in to the game against Mes needing to take all 3 points to stay in touch with the league leaders and chase back to back titles. From the warm up it was very clear that the team was switched on and the winning mentality had returned to the boys in white. The opening 15 mins was a rocky start with balls not quite finding there targets and a few nervous moments in the back line. Christian returned to the squad for his opening game and his quality and leadership was evident from the start, steering the team around the pitch whilst providing an extra bit of reassurance in some last ditch tackles. After 15 minutes the midfield clicked up a gear and the dominant combination of Matt H, Gabe and Thanos took control and the speed of the game lifted. The 3 central midfielders owned the pitch from box to box with some excellent runs being made from the leading goal scorer Ethan and his strike partners Charlie and Enzo. It wasn’t long before Thanos picked up the ball 30 yards out and weaved his way around 3 Mes defenders before slotting the ball neatly passed the advancing keeper for a brilliant opening goal and a “settler” for the squad. From there DB continued to press and Matty H and Gabe were delivering ball after ball for Ethan to charge on to with some fine keeping stopping DB from being 2-3 more ahead. Charlie and Enzo ran rings around there defenders and it wasn’t long before a second goal was set up for The DB marksman – Ethan, who comfortably slotted home to make it 2-0. Half time saw a rejigged back line and midfield and it took a little while for DB to settle. Up the other end of the field Ethan continued to destroy the Mes defense with Enzo and Josh providing some solid support. Ethan picked up a great through ball and buried the ball in to the top corner from 18 yards out to make it 3-0 and put the game to bed. At the other end of the pitch, DB couldn’t quite regain there dominate first half display and Mes was opening up through the middle wave after wave. It wasn’t long before Mes was able to pull a goal back from a scrappy corner. The game fizzled out for the last 10 mins with a few chances being created at both end but neither side capitalizing. Some great finger tip saves from the DB keeper Paulius provided some highlights as the game finished up 3-1. The Tanner De Witt man of the match was Thanos for a workman like performance and brilliant solo goal. Ethan stretches his lead with the golden boot and is proving to be one of the leagues best marksman

DOD: This goes to Christian Romano for thinking Sydney was the capital of Australia