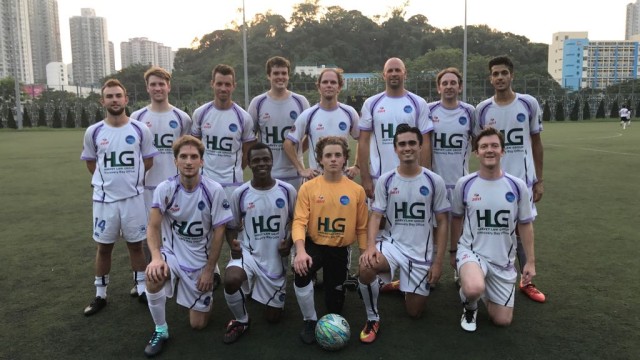 After finishing last week’s match players were already declaring none availability for this match so I knew we would be struggling for numbers but I didn’t expect it to be as difficult as it turned out.

On Friday afternoon I had 10 players after contacting 52 possible players — so I was polishing my boots ready for a comeback.

However, on Friday evening luck turned my way and Tom Halder, Robbie Bacon and Matt Hoare changed work arrangements and despite having to play Sunday they came to help out DBFC.

So all 13 players arrived at this pitch in Tai Po to marvel at its huge size and worry about the heat and pollution. The referee advised that the teams before us had played a 2 minutes water break at 20 mins in both halves of the game so both DBFC and Mes agreed to follow this sensible advice. It was clear that our squad of 13 (2 subs) would be required and it was new boys Steve Lang and Furqan Rehman that would sit out the first 20 minutes. Dan Lye was named as Captain (first time for DBFC).

The first half started with all the pressure from DBFC and Mes rarely got out of their own half. Some good quick passing upfront between twinkle toes Halder and Bert got close in the opening minutes and it was these two dancers that come up trumps after 5 minutes with Robbie slotting in Tom to rifle it in the corner of the net. Soon after the 2nd goal came and it was a pleasure to watch by its simplicity. Some slick passing started in midfield by Dan and involved about 5 or 6 quick sharp passes for Matt H to pass to the far post for Darius to bang in. After the water break Furqan came on for Darius at right mid-field and Steve came on for Rodders in the middle of the park. Not long after Dan Lye , who was commanding the middle of the pitch, sent on of his trade mark cross field through balls for Matt h to outpace his defender and run onto goal to slot a firm shot in at the far post.

At half time Tom had to come off choking in the pollution desperate to rub Vick on his chest but nobody had any. Tom was replaced up front with Rodders and Sam came off for a rest, with Furqan moving to right back and Darius back on at right mid-field. Mes were a bit more competitive in the second half but nothing that our back 4 couldn’t handle, Matija doing a great job at centre-back (having not played for 3 months) alongside David. Before the next water break DBFC had two great chances; Rodders put through to be 1 on 1 with the keeper only to hit his shot at him and have it rebound back into Rodders’ feet for him again to shoot at the keeper. Two bites at the cherry and should have nailed it. Then Robbie was put through by Dan Lye to go 1 on 1 with the Mes keeper who came quickly off his line to spread and save Robbie’s shot going passed him. However, after the water break Rodders redeemed himself when he was on the end of some good DBFC passing to receive the ball on the edge of the 18 yard box and tur inside the defender to just reach the ball with the end of his toe to guide it in at the far post. Sam went back in at the water break for Furqan at right back then Furqan came back on for Dan lye for the last 10 minutes.

There were 10 of us back at the pier Bar for some well earn drinks and a laugh.

MOM: Dan Lye for his control in mid-field and some excellent long passing and a worthy Captain.

DOD: This was looking like Rodders for his double miss at one attempt. However, in steps David to show everyone want true Dicks are made of when he up-ended one of the goby African lads in an unsubtle pretend kick at the ball (the ball was well gone) and a stand-off with baby faces and noises. David is never going to make a character actor but he would make Hollywood in slap stick comedy, Laurel and Hardy style. We just need to find a Laurel centre back. 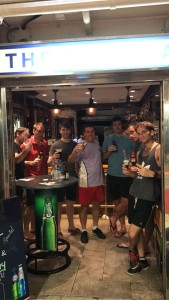