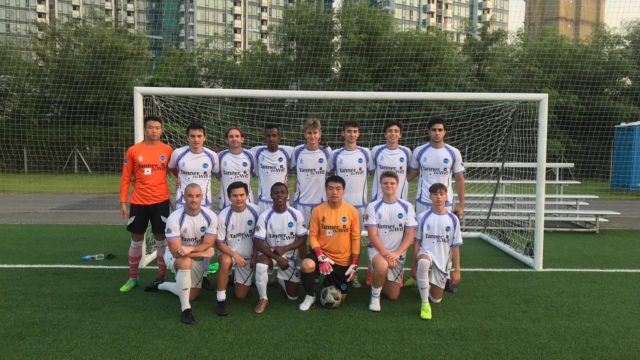 DBFC has its first away game of the year travelling to HKFA training facitlites to take on the newly promoted revolution. This game was crucial in setting the season up for DBFC as a win would keep the squad in touch with the leaders and a loss would push DB down in to the bottom half of the table.
Before the opening whistle, DB seemed mentally switched on and a young and energetic squad combined with a few old heads looked eager to get the game under way. From the start, the DB boys pressed high and fast and looked to find the back of the revolution net every time they had possession. The middle three of Gabe, Thanos and LT were causing rev havoc and Eathen was having a blinder out on left wing. Despite having 15+ chances inside 30 mins, DB couldn’t find the final finish and the possession count was heavily weighted to DBFC. With 10 mins to go, a 20 yard shot was hit straight to the DB keeper, however the speed and power of the shot caught Ricky off guard and spilled out to the feet of a lurking revolution player and he tapped it in for a 1-0 lead against the run of play. Just as half time was approaching, some eager pressing by eathen and Kafi saw a ball whipped in to LT who had time to get the ball under control and round the keeper to slot in a fast reply and level the scores at 1-1 going in to half time.
The DB boys were quietly confident that the goals would come in the second half and all that was need was patience and composure around the box. After some reshuffling for some tired legs, that opening quickly appeared. Thanos took a superb free kick 35 yards from goal and picked out Gabe on the 6 yard box who out leaped the defenders and smashed home a header to take his season tally to 2 and put DB in the lead 2-1. This goal released the pressure and DB began to play with fluidity and composure and pushed forward with raid after raid seeking more goals. With the shot count passing 30 and Kafi, Darius, Leo and Ethan all having open goals to aim at, it didn’t take long for the 3rd to arrive. Ethan carver up the rev midfield and defensive and buried and brilliant goal to take DB to 3 and put the game to bed with 15 to go. The midfield and defensive line controlled the entire hames tempo and The front 3 were having a field day with quality balls, just lacking the killer punch. With 5 to go, Matty H played an unbelievable through ball to Kafi who slotted past the approaching keeper and lifted the score to 4-1. Matty H was tearing up the midfield and put 3-4 players through on an open goal with a MoM performance (alongside a standout game from Ethan). The game finished 4-1 and DB celebrated its most complete game of the season. The boys seem to have found there groove and some great combinations are being built across the park. Well done