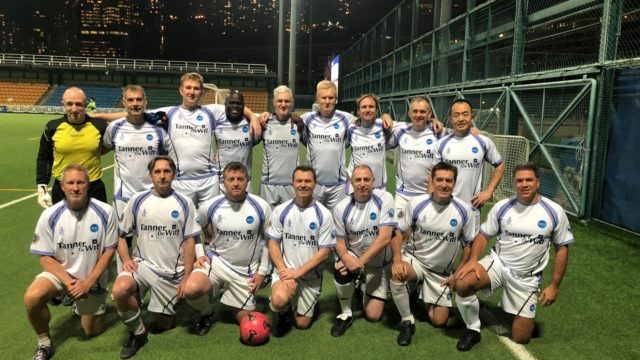 With HK on lock-down, many of our players had been home all week and we were all keen to get some fresh air. Again, despite some of our regulars being out of town we had a full squad and Andy Arch making his debut. The only selection dilemma related to GK: Erikkson has sweated over Beckham’s and Rooney’s metatarsals and Southgate over Harry’s ankle. On this occasion it was David Bradley’s finger. We were up against a strong looking Dynamics side who, although only a squad of 12, had plenty of familiar high quality players, particularly a front 4 of Grainger, Anto, Terry Harris and Hamilton-Brown. We decided to stick Arch up front against 2 big centre halves and although Arch has probably not run a channel for some time, his hold-up possession and lay offs enabled us to get decent possession. However Dynamics perhaps inevitably had a lot more of the possession in the first half and we had to work hard to keep our shape, with Dynamics looking particularly dangerous in the spaces between our CM and CBs. We knew that we would need to take our chances against Dynamics and Tim was the first to come close. Our best chance in the first half fell to Fela – their CBs stopped, thinking Arch was going to receive in an offside position and Fela ran from deep to get the ball and run towards goal. A clinical finish was the order of the day but Fela chose to try and dink the ball over the GK and into Row Z. Meanwhile Dave “the finger” Bradley was keeping us in it with a couple of decent saves. But he could do nothing about Dynamics’ goal after about 25 minutes as Hamilton – Brown received a ball into feet with Pedro in close attendance.  It looked as if Pedro and Steve had taken care of it but the ball fell kindly for H-B to finish from close range. Dynamics were now on top but we managed to do our 5 rotations and stay in the game to HT. The game opened up a bit more in the second half – we had fresh legs but Dynamics still had more possession but without making the same runs in behind our defence. Bradders kept us in it a couple of times, Oisin and Scotty went close but we finished at 0 – 1. No complaints about result or performance. Another good showing in HKFC bar, with everyone except Fela who, the true pro, remained outside to upload his (walking?) stats on to his phone.