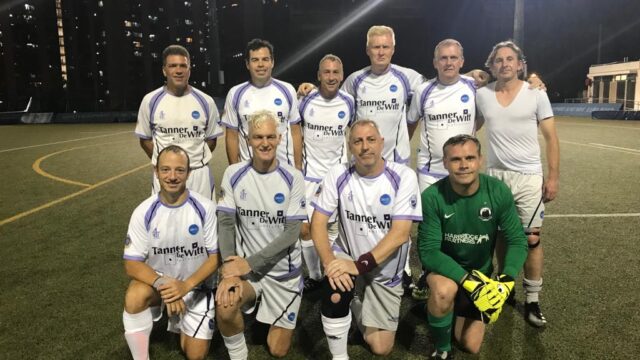 48 hours after our benefit game for Christian, it was always going to be difficult to get a squad out for this one. Thanks to Mac arranging a late signing and to various walking wounded “taking one for the team” we managed to start with 11. We opted for a 4-4-2 with a slightly new look in all areas. Despite all the pre-match uncertainties we proceeded to put on one of our best performances of the season to grind out a 1-0 win. In the first half Fela and new signing Steve B gave us plenty of energy up top, Baz and Mac were solid in the middle and the back 4 were tighter than [deletion on account of family viewing]. We settled with an early goal from debutant Jean-Luc, a volley from close range that needed the eagle eye of the lineswoman to confirm as over the line. KCC had their one and only clear opening soon after, with their shot hitting the underside of the crossbar and falling safely. We got to HT and Fela (after his best shift of the season) left for his conference call, to be replaced by a hobbling Morse as our only sub, who in any other circumstances would have been armchair and slippers at home. 2nd half was relatively comfortable, with some no nonsense play from a team happy to take the narrow win. We slowed things down and denied KCC any momentum and a well organized back line meant that any through balls were either offside or dealt with by Mark. We went closest to scoring in the final minutes when Steve B hit over from close range after a cross from the right. But from being minutes away from cancelling this game, it was great team spirit from everyone who made it to Kings Park.