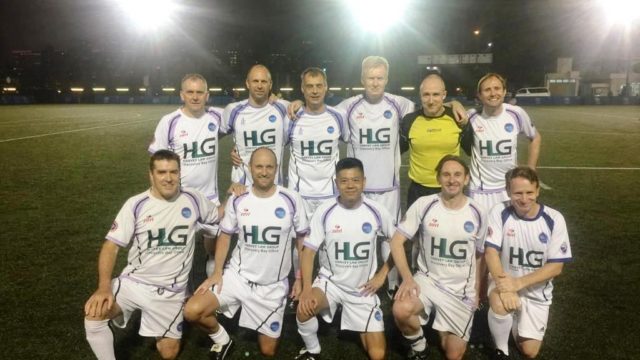 Scheduled as a Legal League Over 45s, fixture, we came up against a USRC squad of 20 which included plenty of younger Vets and even younger guys. With two scheduled late arrivals (Ariel and Oisin), we had no selection problems and opted for a 4-5-1 with one or two of our team in unfamiliar roles: Matija as the furthest forward of a 3-man central midfield and Patric by himself up top. We enjoyed a good first half with plenty of good possession in all areas of the pitch. Midfield got forward well to support Patric, who provided an energetic presence up front. Unfortunately we could not convert our numerous chances in the first half and we would go on to regret that later in the game. Andy came particularly close with a header from short range. Steve took a knock and Ariel came on shortly before half time and then we re-grouped at HT with Oisin coming on up top. USRC completely changed their team for the second half and Gaz in particular came up against a winger who was about half his age – so much for old age football. Despite being up against it, we took a 1-0 lead shortly after HT with Matija running unopposed from about 40 yards out and cooly hitting it past the keeper from the left of the penalty area. Unfortunately, we then stopped getting the good possession we had enjoyed in the first half and USRC started to get runners in behind our back 4. They equalized when their right winger ran beyond the back 4 and fired one past Bradders. Shortly after, they went ahead with a header from a corner. Kieran and Steve came back on for Juggs and Gaz but there was no change to the final score. All in all, an enjoyable run-out and more so than thrashing a bunch of old men. We showed that we were competitive against a team that was at least as strong as USRC’s regular vets side.

MOM: Patric for 1st half but then we took advantage of his versatility and moved him back where he belongs. Andy, Matija and Morse provided the energy in midfield for the entire game but Matija gets the nod for proving that he can strike a ball without toe-punting it.

DOD: Baz – in a younger side, he would have taken more stick for his withdrawal from the squad but we old men understand that our bodies do strange things.