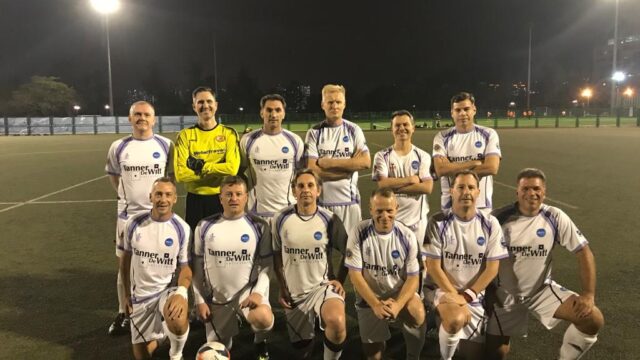 With Simon running late, we started with the bare 11 and not much choice other than to play a 4-5-1 with Scottie up top. This was not ideal given that Spartans only had 9 players for the first 15 minutes. We found it difficult to press home our advantage and it was still 0-0 when Spartans latecomers arrived. We had plenty of possession throughout the 1st half but Spartans looked dangerous on the break with 2 quick players up front. We scored first after about 25 minutes when Simon netted from close range after Spartans GK parried Scottie’s shot. We should have scored a second when Scottie was through 1 on 1 but he dribbled straight into the GK. Spartans upped their game in the 2nd half and equalized after Steve failed to intercept a through ball and their CF got in behind over CBs for a finish through Newley’s legs. Spartans then took the lead after being awarded a penalty when Pedro bundled over their CF. Newley made a great save but Spartans were first to the follow up. It looked as if we were heading for a defeat but Baz had other ideas – unlucky not to be awarded a penalty when tackled from behind but, as we entered the final minute, Baz “felt a touch” and went down in the area after a challenge from GK and Thierry slotted home the equalizer. As ever a very competitive game against Spartans but one that we should probably have won by HT.