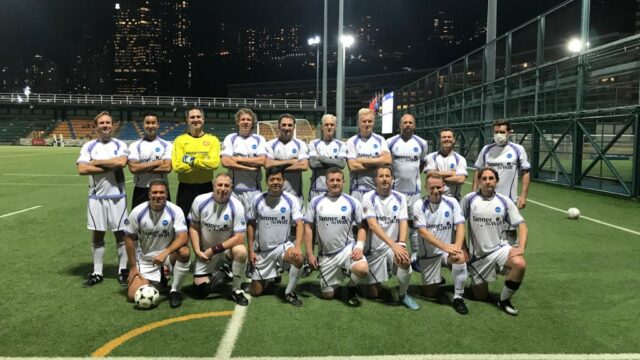 A big squad for this one but we managed to get everyone good game time given that, for various reasons, a number of our players were not looking for as much game time as usual. As usual for our games with Dynamics, we opted for 4-5-1 with Kieran M up top. For the first 15 minutes, it was one way traffic, with Dynamics having 80% of the possession and their younger players dictating the play from CM. Their main outlet was Simon Galvin at RW but fortunately we had Pedro at LB who was mobile enough to restrict him to limited damage. Despite the possession, Dynamics were not creating clear chances and Newley, our debut making GK, kept good command of his area. After the initial onslaught we worked out a very simple plan – ball either side of their CBs, getting Kieran M into one on ones on at least 3 separate occasions. Dynamics went ahead after about 20 minutes after their striker latched on to a pass in our right channel, giving him a comfortable finish. But we dug in and Kieran M eventually got his just desserts with a left foot shot after again running off their CBs. We got to HT at 1-1 but were optimistic thanks to a stronger than usual bench to give us fresh legs for the second half; and helped by the fact that their main playmaker went off at HT. The 2nd half was not as frenetic but somehow Dynamics scored twice in quick succession, with simple tap ins from close range after short crosses from the by-line. However Mike C restored some optimism after a finish from close range and we could have got even closer when Thierry’s shot was tipped over. So we ended up at 2-3, which was not a bad result against a Dynamics team that lacked numbers but had plenty of quality. Some good performances but special mentions to Pedro and Kieran M who did the full 80 minutes and helped keep us in the game during the difficult early stages.