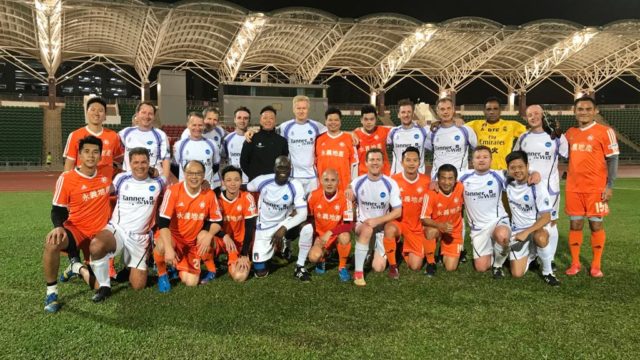 Having struggled initially to get decent squad numbers, we ended up with 17 thanks to some of the younger vets signing up. Having had 6 late withdrawals for our previous fixture, we took no chances for this early kick off in an unfamiliar but splendid location. We never know who we are up against with the ex-pros but, with several of their key players missing from the line-up, we sensed that we were in with a chance. We set up as a 4-5-1 in order to have sufficient numbers in midfield, with Kieran M flying solo up front. We decided to pay 3 thirds and had the difficult task of getting everyone sufficient game time whilst keeping a consistent level of performance. This did not work out as planned because, having led 1-0 half way through the game, we ended up losing 5-2 with 4 of their goals being scored in the final 25 minutes. We were the first to score after we broke from the back and got possession out to right wing, with Brendon heading in a cross from close range. We made 6 changes after 35 minutes, which inevitably disturbed our rhythm. However it took a dodgy goal for the ex-pros to get back on terms, with their striker clearly fouling in the lead up. With a couple of exceptions, we reacted as graciously as possible given that there was no referee or linesman to adjudicate. At the second break, off came Kieran M, Morse, Neil and Ben B and some of the above insist on a note in the match report that they were not on the pitch for the final 25 minutes. The ex pros dominated the final period of the game, scoring 4 goals in quick succession; not that we were without chances. O’B floated over a couple of nice ones but we failed to connect. We had the last word when Sam netted from close range but by that stage we had been well beaten. Still, it was an enjoyable game in first class surroundings on what must surely be one of the best surfaces in HK.