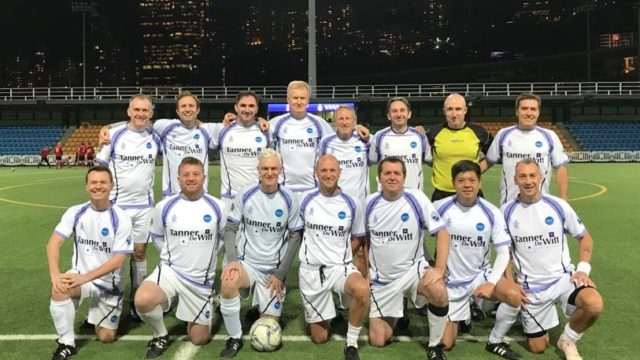 Everyone’s favourite time slot, there was no problem getting out a squad of 16 despite 3 late withdrawals. After 4 straight losses at HKFC, we were determined to get back to winning ways. Again we set up as a 4-5-1 against a relatively youthful Gazelles side, with Patric playing a false 9 (can also play false 2, 3, 7 and elsewhere). First decent chance came our way after about 15 minutes, with Mike going to ground at the far post like a coronavirus patient and scuffing his shot. Gazelles had plenty of possession but played a high line, inviting our speedsters to get in behind. Patric was the first to benefit after their GK and CB got in a tangle, leaving Patric with an open goal. The game then turned in a one minute spell. Bradders (in between complaints about his swollen finger) kept us in it with a save from their CF in a 1 on 1; and from the ensuing break Scotty beat the offside trap and scored. Gazelles complained furiously about an alleged foul in the build up as well as offside but only had their own referee to blame. In a pre-organized shuffle, our 5 subs came on after 30 minutes and we got to HT at 2-0. In the 2nd half we knew that the next goal would be vital and it was Andy C at left wing who obliged – dispossessing their RB and hitting one over GK from 30 yards. We did our second set of rotations so that everyone could get 2 thirds, with our senior citizens taking a break. Gazelles pulled one back in the final 10 minutes but it was no more than a consolation. A pleasing result and performance and getting to the bar before 9p.m. on a Friday evening is a highlight for many of our team. 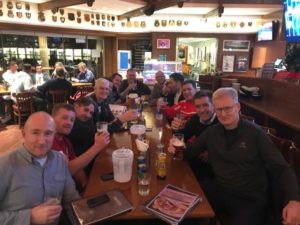