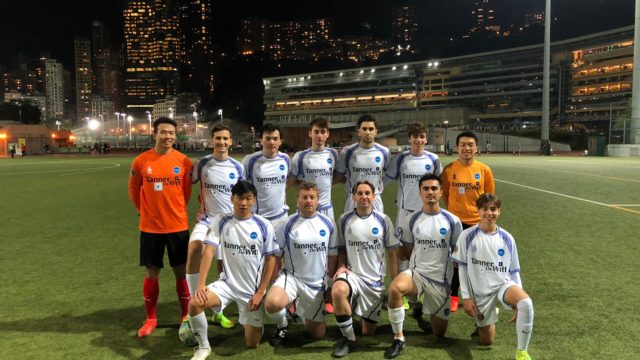 Another week of players away, working/coaching and a couple only able to play half.  Despite this we managed to get together a good squad with a mix of skill, pace and power. Both teams started brightly but the first chance fell to Charlie after some nice player down the right and a nice ball squared by Ethan left Charlie with what seemed just the keeper to beat but his right foot first touch let him down a little and the keeper managed to close the angle on goal and make a fine save.  J Leaguers showed patches of dangerous play but DB’s work rate and pace was too much for the opponents and it took its toll when Ethan bagged his first of 3 goals after a nice throw ball from Enzo. His and DB’s second was again from a nice through ball from Enzo which all Ethan had to do is lift the ball over the oncoming keeper to make it 2 in quick succession.  With barely 15 minutes gone DB had sped into a commanding 3 nil advantage when Ethan received the ball with his back to goal on the halfway line and with a nice piece of skill turned his marker and raced towards goal before releasing a curling effort into the top right hand corner of the goal.  DB defended like warriors led by the oldest war horse in the team Morse who was making tackles and blocking shots like a young John Terry. The midfield trio of Thanos, Matthew and Gabe kept control of the ball nicely with short swift passes link up with defense and the DB forward line.  Just before half time DB made a change with Roy coming on for Enzo and with Roy’s first touch ( a corner ) he crossed for Christian to jump like a salmon out of water at the back post to header in DB’s 4th.

The half time chat was relatively easy, keep it up and not to let our guard down as J Leaguers are not a team known for rolling over and losing their heads. A couple of changes made Kasper on for Ricky in goal and as Leo had to leave for a family meal! So Roy slotted to left back from right wing and Enzo came back on. The second half started as expected J Leaguers kept the ball and moved it around in some dangerous areas and DB found it harder to dominate as they had done so in the first half.  However a rash challenge on Enzo just inside the opponents half gave us a chance via the wand of Marco’s right boot to get the ball into the box, which found the head of another salmon leap this time Matthew H was on there to head the ball home.  J Leaguers pulled a goal back via a harsh handball that the referee gave from a ricochet after a J leaguers corner, it was DB who score the last goal of the game.  Snowy the destroyer ( on for Gabe who had to leave early ) broke up a J Leaguers attack 10 yards inside the DB half and managed to release Charlie on the left who then found Ethan who’s disco feet dazzled the J leaguers right back and then squared the ball nicely for an on rushing Roy to place home from 6 yards.  We could have had a 7th but for an astonishing 5 yard miss from young Charlie, it’s up there with a couple from last season! With just 5 minutes to go Roy went over on his ankle and was replaced by Scotty up top and Ethan switched to left wing to see the game out.

DOD – Charlie for missing an open goal from 5 yards. A close second was Ethan for playing Pokémon Go on his phone at the pier.

MOM – Ethan for bagging another trick!  Followed closely by a colossus defensive display by Morse.

Next week takes us to Ma On Shan for a game against Goodfellas which is our last this year.