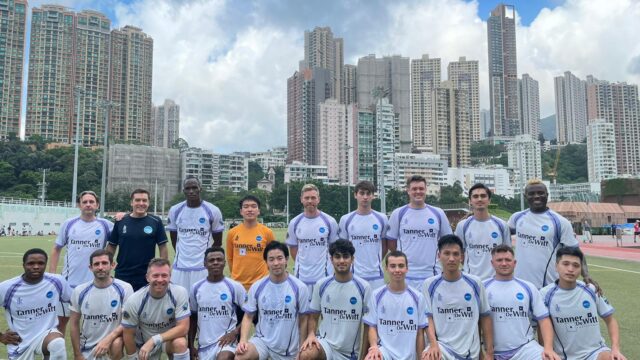 DBFC started the game with an intensity which matched the sweltering sunny weather and found themselves ahead within a few minutes with their first coordinated attack down the right. Darius intercepted a loose cross-field pass, slipped the ball to Awal who then released Ethan down the wing. Ethan’s whipped cross to the near post was deflected into the net via the opposition defender. 1-0.

We gradually took control of possession with 1-2 touch football. Sisso cushioned a clipped pass back to Danny in the centre with his first touch, who then played a lofted through ball onto Ethan’s laces as he burst through the defensive line. Ethan took one touch to control and another to finish 1-on-1 with the keeper. 2-0.

A similar team move ended with Crommy playing a perfectly weighted lofted through ball between the defenders to Ethan, who rolled it past the onrushing keeper. 3-0.

Spartans were given a lifeline when Tita’s perfectly timed tackle in the box on a very quick and tricky midfielder was inexplicably deemed a foul. 3-1.

We stayed focused, putting together another good move down the right wing which was finished off by Ethan in the six yard box. 4-1.

The half-time team talk was simple. Keep up the hard work. Players were rotated to maintain the team’s energy and give everyone time to make an impact. Spartans created a few chances in the second half, one long-range shot forcing Ricky to pull off a sharp diving save to his left. As the cloud cover cooled the air, Zoeller scored a headed goal at the back post and Makito slotted one into the side netting to wrap up the game and send DBFC into the quarter finals of the cup. 6-1.

MOM: Good team performance from everyone.

DOD: Nobody for once!