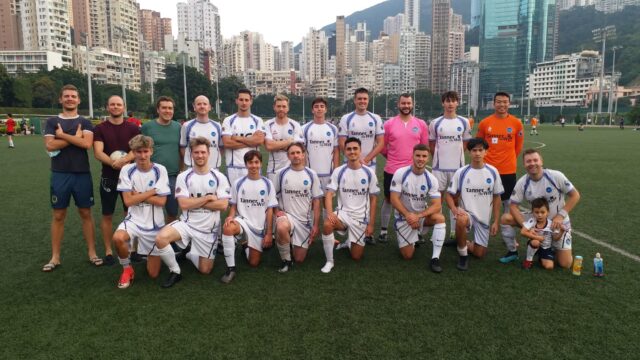 Coming off the back of two frustrating defeats, where goals were easy to come by but keeping things tight defensively was proving difficult, DB were looking to make a statement that they could continue to play free flowing football whilst shoring things up, as a team, at the back.

They got off to a great start, looking sprightly and competing for first, second and third balls and were rewarded in the first five minutes when Ivan Yang made a darting run and danced around the keeper and slotted into an empty net.

The game settled down with DB finding a lot of joy between the lines with Ethan Squires, Ryan Hervel, Steve Lang, Paul Crompton and Ivan Yang displaying some beautiful link up play to drive the team forward and create an abundance of chances. The only time Club Tropicana did get behind the back four they were thwarted by Morse sniffing out the danger and getting the team out of trouble with a defensive header at the back post which stopped an almost certain goal. As the game neared towards the half time whistle, the normally reliable Matt Zoeller was finding it difficult to impose himself at all and find people to feet but he redeemed himself somewhat when he linked up well with Crompton and Hervel for the second when some neat one touch football around the edge of the box left Crompton with only the keeper to beat and he duely nudged home with a right foot finish that a young spirited Tony Hesketh would have been proud of and sent DB into half time with a 2 goal cushion.

Learning from mistakes that have marred the start of the second half throughout the season, DB came out strong in the second half and were composed at the back, knocking it around with aplomb and Shanahan, Rollinson, Romano, Leo and Purnell creating a brick wall that found Club Tropicana running out of options.

Some inspired substitutions from manager Gary Rollinson meant there was a very lively last twenty minutes. Sensing it really was not Zoeller’s day, he decided to sub him off in order to inject some much needed pace, enthusiasm and intellect into the attack. This paid instant dividends as the young trio of Higgins, Squires and Pedro, accompanied by the wise heads of Crompton and Hoare, started to carve Club Tropicana open at will. Fifteen minutes later Squires and Higgins had helped themselves to a brace a piece, with one of Squires strikes a certainty for goal of the season contender and Higgins first strike was in no small part to a sensational ball from Shanahan that was reminiscent of Huddersfield’s very own Malcolm Brown back in the day.

With time starting to run out and some of the older heavier legs starting to fade, Club Tropicana pulled two back, and it could have been three if it wasn’t for a great stop by Purnell who got down low to his left and fantastically palmed the ball away to safety. It was a great stop, and quite unexpected after watching a free kick sail in on his side of the goal from 35 yards just moments before.

Overall, it was a fantastic 6-2 win where everyone involved played their part, some beautiful football was played going forwards, very few chances handed out at the back and a deserved return to winning ways.