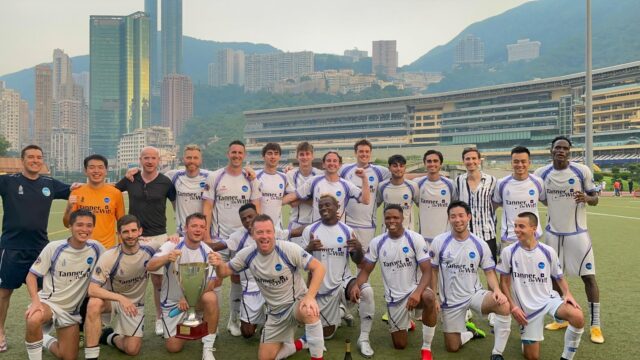 Cup final day and it was a scorcher at Happy Valley. Gazza and Morse were pumped up and spoke of the importance of hard work and desire. The game got off to a flyer when DB scored after two minutes with Crommy reeling in the years with an excellent finish with a swing of the right boot from the edge of the box as the ball broke kindly to him. There were shades of Luke Shaw’s goal within two minutes in England’s Euro final and in particular with how DB then lost control of the game for 10 minutes or so afterwards, in this case giving the Spartans rather than the Italians time and space to attack. Spartans capitalised well and played a long ball over Leo’s head with a quick counter and their forward scuffed one right down the middle. Normally an easy catch but Ricky was staring lovingly at his missus on the sidelines and seemed distracted as it went straight under him and trickled into the net. Luckily it was not to be a repeat of the European final lost by England and football did come home this time largely through the boot of one man, Awol. He put DB ahead before half time again with a jinking run turning his man inside out before drilling in a lovely low shot. Other moments of note in the first half were Morse losing the plot at ex TS Danny Loup after he tried a long range shot. Luckily proud father Riggers stood up to him and told him bullying would not be tolerated. Matthew Hoare also eliminated himself from the game after trying to assassinate their midfielder for a second time but this time injured himself in the process, with a nasty cut to the shin. At half time it was 2-1 and DB were back in control and in the ascendancy. Zoeller gave the most crucial bit of advice to the players during the team talk with “give the ball to Awal”.

This tactical masterstroke paid dividends in the second half where DB came flying out of the blocks and a quickfire double certainly dampened the spirits of the lively Spartans crowd on the sidelines. Almost straight from kick off an intercepted ball by their young left back, just on the field, was miscontrolled and Awal nicked it off him and slotted near post. Shortly after a sumptuous Crommy corner (thankfully it wasn’t a free kick) was glanced in by Awal again but the marking was terrible as he didn’t even get off the ground. The fifth again was from another delightful corner delivery but this time from the outswinger of Makito’s right boot. Again unmarked Awal headed in. 5-1 up and Gazza and Morse were the epitome of peace and tranquility on the sideline apart from one or two outbursts about water breaks, linesemen, subs, Riggers falling apart at the back, and constant patrolling of the sideline like Ricky waiting outside his missus house. All the subs got on at different points and played their part (except David ‘John Terry’ Rollinson), with Krisna in particular very unlucky not to score after a great save from their keeper and even Ethan re-emerged from the shadows to play again after an unusually quiet day. After they pulled one back from a back heel DB finished the job with Awol delightfully dinking the ball over their rather aggressive goalkeeper to send the DB ultras into raptures and invading the pitch. DB were crowned Cup Champions again and football came home finally, a true modern day fairytale.

That was not the end though with a great turnout down the pier bar awards were given out. Honourable mentions to Player of the Season Ethan Squires, Young Player of the Season Leo, Goal of the season with Morse’s fully intended long ranger lob against KCC, worst dressed player Crommy (and his Gilet) and most likely to slice the ball out of play David Rollinson. The celebrations continued into the night with Crommy leading the charge on stage with the trophy before Morse took it off him again and ex legends player JB showed up to sort the lads out with a bottle and mark Charlie’s 18th birthday in style.

“WE ARE THE CHAMPIONS” 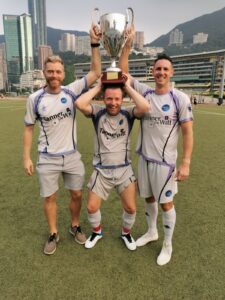 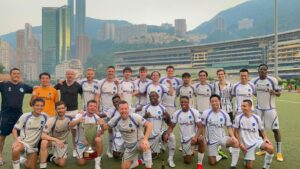