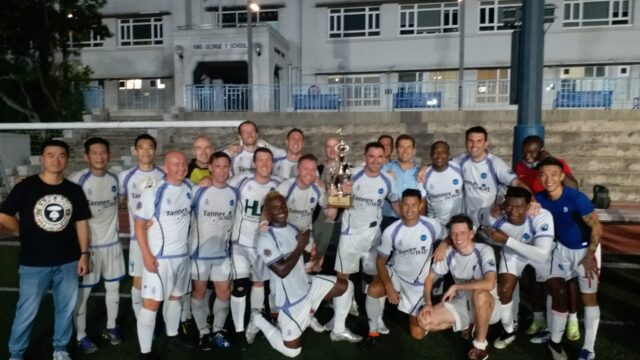 The roll call for this game wasn’t taken up strongly during the week and there were late additions of Riggers (back from injury), Tita and new boy Ben (Pedro’s friend) to give us a squad of 14 by Sunday. Still there were a few of our stronger players absent for this very tough game and notably Paul Crompton was out with a back issue. However, Crommy was pitch-side offering thoughts on match strategy and sharing management duties with Gaffer Gaz.

Godfathers started off very quickly and dominated the opening 25 minutes and the DBFC defenders had to work particularly hard to keep out the Godfathers attacks. The DBFC midfield were sitting deep and most DBFC balls forward weren’t sticking with the DBFC forwards and so a respite from the pressure was a long time coming. Godfathers went close on a couple of occasions; one when a ball through was lobbed by the Godfathers’ forward over the out-coming Bradders, only to hit the post then the bar and safely into Bradders’ hands; the other being a shot from Godfathers’ left side going just wide of the far post. Eventually, with 15 minutes of the first half remaining, DBFC seemed to settle and get their passing game going to keep possession and advance as a team up the pitch. The DBFC midfield were then playing higher and keeping the play in the Godfathers’ half and the DBFC defence got a bit of a breather. DBFC had a number of half chances at this point with a good shot into the side netting and another over the bar. Sam Riley seemed to get caught by surprise when receiving a pass in the Godfather’s 18-yard box with time to turn towards goal but only managed a weak shot into the Keeper’s hands. This DBFC pressure was rewarded when San, positioned to the right of centre-midfield, floated a ball over the Godfathers’ Centre Backs for new recruit Ben, who had run through behind the Godfathers’ defence with close attention of a defender, who flicked the ball inside only to be tripped up by that same Godfathers’ defender. The referee gave a penalty, apparently not the trip up but for a handball. To me it was a case of right decision but wrong reason. Thierry stepped up and confidently blasted the ball into the net, sending the Godfathers’ keeper the wrong way. DBFC saw out the remaining 5 minutes to half time to go in as 1-0 leaders.

The second half started as the first with Godfathers having most the football and pressing for the equalizer. Wave after wave of the Godfathers’ attacks were foiled by a resolute DBFC defence. Every DBFC player was working hard closing down and DBFC got away with a couple of scares and a big helping of luck when another lob over DBFC keeper (Bradders) narrowly missed the target. DBFC did have spells moving forward and got into a couple of decent goal scoring opportunities; one DBFC attempt hit the inside of the post to come back out and be cleared. However, the last 20 minutes was mostly Godfathers pressing for the equalizer with many long ball into the box and DBFC throwing everything on the line to keep the lead. As time ticked by Godfathers were noticeably frustrated and many fouls and confrontations were boiling up and the referee started dishing out yellow cards. DBFC did hold out to final whistle and chalked up a great victory, undoubtedly against the balance of play. This win was a clear message that DBFC mean to win the Legend League title for a second season in a row.

MOM: Both Tita and Riggers have a strong shout for this accolade after a great defensive display but Thierry came on half way through the first half and worked so hard, as everyone was doing, but he did blast home the penalty despite the pressure. Thierry is going back to France for a few months now, so it was a fitting way to leave his Gallic mark.

DOD: Akosah for saying he will make the second half to give some fresh energy to DBFC tiring plays but then turning up with 5 minutes left to play. Good job we didn’t need him!