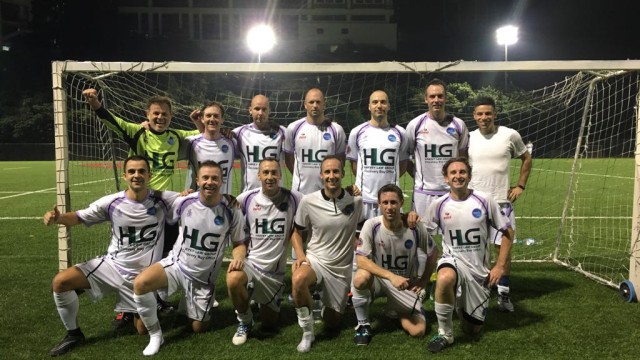 The DBFC Vets great start to the season continues with a hard fought win at Hong Kong International School’s Tai Tam pitch last night. So half way through the season (played 7 games) the DBFC Vets have only dropped 2 points and sit comfortably at the top of the Legends League table. Manager Gianluca knew last night would be a tough encounter, which didn’t get off to a good start when his taxi didn’t turn up and he and a few other boys from DB got to the pitch minutes before kick-off allowing little time for team talk. Spartans turned up with their usual large squad of big players and made this a very physical game. DBFC were easily the better football side and Spartans restricted to long balls forward. Many chances came DBFC way but strong defending and great goal keeping from the Spartans keeper kept DBFC out. DBFC persevered despite not having the luck for a number of attempts to break the dead-lock and eventually, with only 5 minutes left to play got a well-deserved goal. Rudi Dray broke down the right to fire a cross in across the six yard box that Kieran McKnight met perfectly at full pace to head the ball and himself into the net. This was a very tough physical encounter that DBFC Vets worked very hard to squeeze the result. Full report to follow on www.discoverybayfc.com

I was very pleased with our match, we finally played Spartans to our strenght.
We played our football trying to keep it on the floor, pressed them high limiting their long balls and conquering back the ball often, a lot of smart through balls for the guys playing wide making good runs. Perfect defence and patience when the goal wasn’t coming. I think we dominated the game, we only had one big risk in the end and I had to smash Andy Mitchell to avenge Baz ! Well done lads.

Things we can improve: use Crommie more, when we see him making his movement, going long short for the layoff we need people making the runs before he gets the ball.
Do not loose our head, if need to take a card it has to be for a good reason, Dom foul and in the second half to interrupt a possible break was textbook professional fouling, loved it that was a well invested yellow.

MOM: Great performance overall, tough choice but I think today Stefano was brilliant. Composed, never just kicked the ball away unless desperate, great reading of the game, started all the plays from the back, won all the headers and the challenges. A young Franco Baresi.
Moment of the match: I guess the goal is a classic of DBFC football and what we do best, great opening play (can’t remember who started it, Pascal), great movement from Rudi who stayed wide and run into the space, fast cross from the goal line for the guy coming from behind, great attack of the near post fro Kieran McK and surgical finish. Perfect execution of executive orders from the management !

SPECIAL MENTION: everybody for not complaining for all the subs and change of positions, hopefully everybody had at least 30 minutes. Special thanks to Rudi for making an effort to come even just for the second half, great game you have been instrumental in the goal and keeping possesion when we were tired in the end.
DOD: I will take this time for loosing the plot probably in the last 10 minutes, Nick called me and asked “who is playing mid?”, I had a look around and I obviously f**** up a few instructions to players “keep doing what you are doing, you are doing great, we are winning” was my answer.
I was checking the time from the pitch clock that was a mile away and with no ticks trying to think subs, game time, positions while shouting to Matija not to kill anybody. I finished with a headache !

Great win against our old nemesis Spartans, I am sure we made Robin proud.