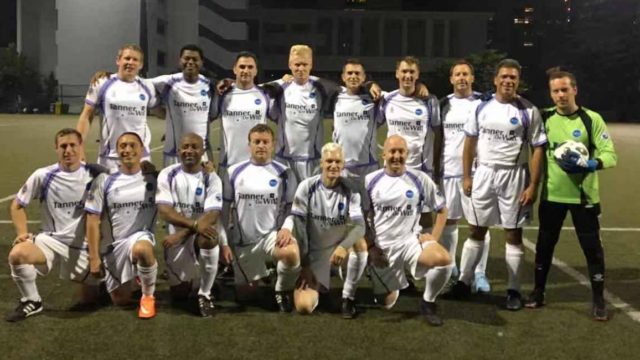 The third game of the season and a few new faces from the previous games against Kennedy Town. DBFC started strongly playing some controlled football between the defence and midfield, our new striker, Steph, was doing a good job of holding the ball up in the striker’s role, however DB were struggling to create much. With 20 minutes gone USRC had their first attack and the result was a corner. Unfortunately, as with the previous match with Kennedy Town, DBFC struggled to defend set pieces and the corner resulted in USRC going up by one goal. The half ended with USRC one goal up, the score did not reflect the way in which DBFC had controlled much of the game. After half time DBFC made a couple of changes to freshen things up, Brendon and Amin coming on to give us a little more energy in the final third. Ten minutes into the second half a DB corner whipped into the front post was met by Brendon whose shot came off a USRC defender who put into their own net. With the possibility of the first points of the season DB attacked USRC throughout the second half which became more and more open. It was ultimately though a mistake at the back that cost DB the chance of coming away with the points. A loose pass from the CB position fell to a USRC attacker who broke quickly in a two on one situation which was easily finished. The game had ten minutes left in it, despite wave after wave of DB attacks we could not break through and ended up losing 2-1. Another poor result for DBFC made a little more disappointing as we could have had a lot more from the game.

MOM: Thierry, a passionate performance throughout, maybe too much at times.

DOD: Brendon, a dubious claim at best for a goal smacked of desperation.