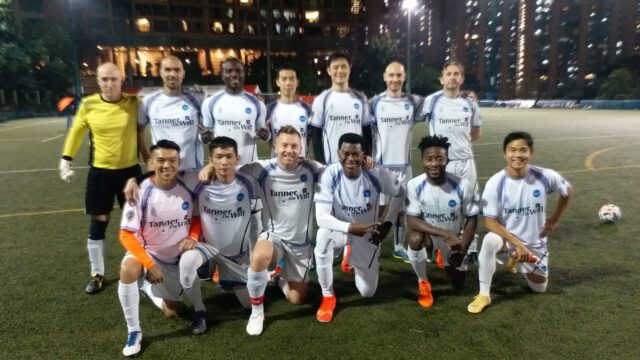 Manager Gazza had to work hard to get a squad together for this game but with the help of Crommy, Stephane and Pedro all introducing new signings and sweet talking Nik to make his come-back from injury, we managed to get together 15 players.
This was our 2nd Legends League match of the 2021-22 season but also our final game of the 2021 year so DBFC Vets were looking to maintain their unbeaten run throughout 2021.

Strong wind and rain made for a challenging game at Kings Park during a rare December typhoon but Gazza selected a strong line up to make sure there were no leaks in our defence.
Immediately from kick-off KCC showed that they were a much improved football team from being the whipping boys of last season and on their narrow Kings Park home pitch no. 2 they set up to defend in numbers and try catch us on the break. However, DBFC Vets settled quickly into some great passing football and good work by new signing Tong on the right flank setting up many of the attacks and Eugene (a.k.a. “Petit”) who looked settled in the centre of midfield, forming a strong partnership with San. It took DBFC Vets 20 minutes for a break through and it came from a corner, which wasn’t cleared by KCC, resulting in a number of blocked DBFC Vets shots before Eugene got to a loose ball to beat the KCC keeper and put DBFC 1-0 up. It took another 10 minutes for DBFC Vets to find their second goal and it started from the back with Morse passing in up to Stephane who dribbled before finding Tong to cross in and Ben to slot home. DBFC Vets pressed further for another goal but a much improved KCC side held for a 2-0 half time score line.

More words of wisdom and a change of personnel at half time (Nik and new signing Fred) kept the DB foot on the gas in the second half but more goals didn’t come despite some clear chances.

KCC managed to score a goal late in the game but it was too little too late and the 3 points went into Gazza’s kitbag along with the dirty washing.

Well done to all the players for their hard work in difficult conditions. It is a great achievement to complete the calendar year undefeated, let’s keep it going! Have a very Merry Christmas and we go again in the New Year with our next fixture on Monday 3rd January 2022.

MOM: New signings Tong and Eugene were impressive but it was Tong that gets the shout for his none stop pressing forward with skill and pace.

DOD: This has to be Pedro for turning up with only 5 minutes left in the game. This follows the same situation as last week with Akosah. Their late appearance was excusable because of work commitments but still worthy DOD awards.