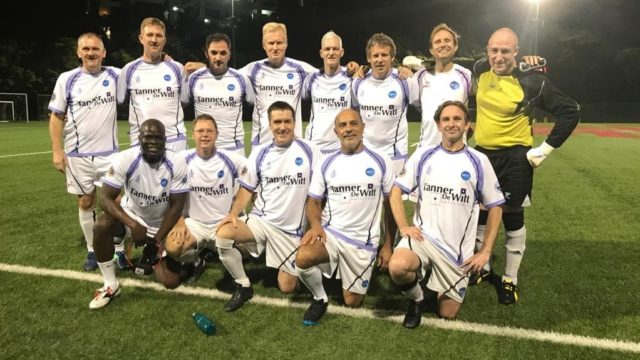 The fourth game of the season and DB were desperate to get some points on the board after a difficult start to the campaign. DB set up in an attacking 4-4-2 with Steph at front supported by Matija in a new more attacking role. The game started with DB putting Spartans on the back foot from the off with some slick passing and movement from the front two. The pressure told quickly on the Spartans defence with a mistake leading to Matija picking up a loose ball and sliding the ball across to Stephan for an easy finish. Spartans looked rattled and DB again took the initiative, more tentative defending from Spartans led to Matija stealing the ball and running through to hit a 20 yard shot past the keeper. Things were looking up for DB, however the calm was soon broken by a Spartans free kick whipped into the box, again a challenge defending set pieces led to us conceding, making the score 2-1. The rest of the half continued in the same vein though and with five minutes left on the clock another defensive mistake presented Matija with the ball in the box, the fill in striker made no mistake and finished confidently. Half time, 3-1 to DB and the squad could see our first win within grasp. Unfortunately, the second half was a scrappy affair with many errors, the control that DB initially had was lost and Spartans scored two quick fire goals from two defensive mistakes to go 3-3. With this momentum swung to Spartans and a fourth goal swiftly followed. DB pushed in the last 10 minutes for an equaliser but were not successful, ending the night on the end of another disappointing loss.

DOD: DB in the second half, a calamity of individual and team errors.