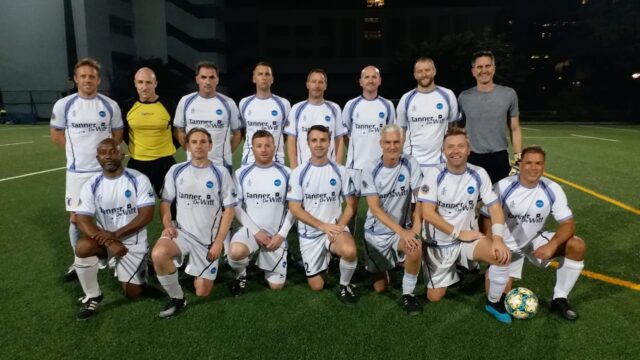 The much delayed 2020 veterans season began with a potentially tough game for DBFC. With a new management structure in place, Crommy was calling the shots, setting the team up as a 4-3-3 / 4-5-1 depending on the flow of the game. The starting line up was strong throughout, the defence was marshalled by Pedro, directing his young charges admirably. In midfield, Thierry provided the bite while Travis and William provided creativity for Scotty, Crommy and new signing Chris Pickles to feed off.

DB vets started on the front foot, pushing USRC back early on, the pressure was quickly rewarded as Crommy snuck in at the back post with a neat finish to put us 1-0 up. The pressure continued, a high ball into the box from a free kick was met with a headed finish from Chris Pickles, at 2-0 DB were cruising. Early injuries to Scotty meant a slight change of formation as Chris went out onto the right and Stephane went up front to hold the ball up. The change did nothing to affect DB’s rhythm though, a third goal swiftly followed from Crommy, after a nice exchange of passes with Chris Pickles. At the back Bradders kept himself warm with a sharp one on one save when USRC broke after a DB corner. Another goal before half time took the pressure off and an upbeat team talk from Gazza and Crommy emphasised the importance of keeping things tight as USRC still presented something of a threat.

At half time a couple of subs were given a run out, Ben and Steve took to the flanks for some aimless running and occasional attempts at playing football. Fortunately, the spine remained top quality, emphasised by Chris Pickles running on to a perfectly weighted through ball from Travis and hitting the ball high into the top corner from outside the area for DB’s fifth goal of the night. The second half did see something of a fightback from USRC, who pressed higher up the pitch and began to take advantage of tiring DB legs. To make matters a little more interesting Thierry took some of his pent up lockdown frustration out on the referee, opposing players and anyone within earshot, earning himself a well-deserved second yellow card with 15 minutes still to play. Despite being down to 10 men though, DB scored a sixth goal on the break, another cool finish from Crommy.

Overall an excellent start to the season, a clean sheet, six goals and some excellent performances from the new boys; Dan and Brandon were solid at the back, Chris was incisive up front and Newley confident in goal. A perfect night was capped off with a few beers down at our sponsors the pier bar.

MOM: Chris Pickles, an all-round excellent performance on his debut, two good goals and some superb link up play.

DOD: Thierry, not a bad performance at all but a red card when no one else really did much wrong. 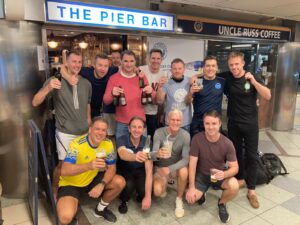