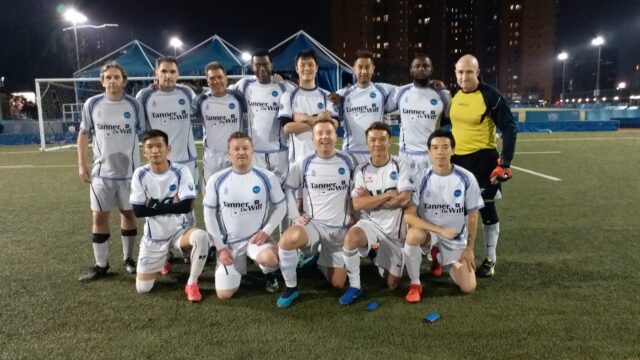 In pre-match team talk Captain Crommy emphasized the need to not be complacent when playing this bottom of the league team, expecting them to roll over. We had been caught out with this attitude previously so focus on the job was needed. Immediately after kick-off it was obvious that KCC were set-up to defend deep in numbers and look for a long ball to their striker to sneak a goal.

DBFC took a little while to get their passing game in order and started spraying the ball around the back and moving it forward trying to use the wings on this very narrow pitch. While the defence needed to be switched on to cope with the long ball to the KCC striker but mainly no issues and Bradders had a very quiet time. However, going forward was not producing a goal after wave and wave of attack as KCC defended well in numbers, crowding out DBFC. Eventually, Pierre broke the dead lock after 20 minutes, getting to a low cross from the left wing just before the KCC keeper to see the ball roll into the net. A sigh of relief from Gaffa Gazza and more so when 10 minutes later Pierre won a penalty that Crommy dispatched with ease (while trying to make a selfie video to send to his mate Zoeller for penalty practice use). So 2 – 0 up at half time.

3 Changes a half time saw Kit come for Scotty, Pui coming on for Morse and Simon on for Pedro. The new boys were to make an impact in the first 5 minutes of play by stringing a long spell of passing football that ended up with Kit breaking free down the left to fire in a very clinical goal. KCC didn’t drop at this point and were determined to work hard in defence to keep the score down and hope for a break up front with their one striker. It took another 15 minutes before DBFC saw their 4th goal, again from some nice passing from defence through midfield to send Pierre clear to get his 2nd goal of the match. At this point Crommy came off for Scotty to get back in and Pedro back in for Stephane, Morse’s tightening hamstring prevented his return to the field.

The game continued, with lots of passing from DBFC and coming very close to scoring, but credit to KCC who continued to defend with commitment. Bradders, who up until this point was not involved (seen sitting against his goal post a number of times) was suddenly called into action when a KCC long ball was misread by DBFC centre-backs and bounced between them for the KCC striker to run through and fire in a very good shot that Bradders got his finger-tips on at full stretch dive to turn the ball around the post (great save). This seemed to fire up DBFC and with 15 minutes left the 5th goal was scored after some great football that saw a shot blocked, the follow up hit the bar to rebound to the edge of the box for San to coolly control his shot into the net. The KCC defence seemed to drop their commitment at this point with wave after wave of DBFC attacks. The 6th goal from a great free kick by Thierry, 7th goal a header by San at the far post after a run and cross by Kit, the 8th goal from a low drive from Scotty after a burst through run down the right and the final goal by Pierre to chalk up his hat-trick.

MOM: Pierre; for being a none stop threat up front and getting a hat-trick.

DOD: Captain Crommy; for showering early and missing his teams last 5 goals, especially Thierry’s free-kick so that he could see how to get them on target.