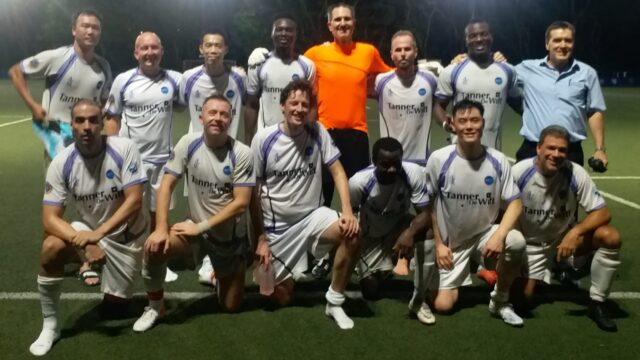 A strong line up, if not blessed with quite enough players to rotate the old men of DBFC as coach Gazza would have wished, arrived at KGV for our second cup match against Kennedy Town. Having drawn the first tie against HKFC in a three-sided group, it was a case of trying to get the best possible scoreline to help us through to the semi-finals. This was aided by bringing in Newley for ‘sicknote’ Bradders, the latter helping with a professional warm up so that the stand-in keeper was ready for whatever he would face.

When an early corner from the right, bounced down off Tita and rolled forlornly into the bottom corner, it seemed that things might work out all right for us. This conclusion was reinforced with the largely one-way traffic over the next 20-minutes. Crommy got his first with a firm right foot finish from Nik’s clipped cross behind the defence, before Kwai got into the same position to find the gap next to the keeper’s ankle for a quick 3-0 lead. A cross from Simon on the right ended with three of our forwards around a bouncing ball in the box and Crommy rose up in a manner that bought to mind Willy the Orca jumping over the rocks, to scissor kick the ball over the stranded keeper. After Kennedy Town made some breaks and win the ball from a bit of impatience on our part, DBFC settled again and began recycling the ball from wing to wing to find gaps. After one phase of around 20 passes stretched the opposition, Nin at centre back punched a pass straight through to Kwai who joined Crommy on a brace before half-time.

We had already rotated Brendon and Shyne, who were both lively on the right wing, whilst Wakasso came on at right back, and Pedro readied for his role on the left flank.

Kennedy Town’s willingness to fight in the second half showrd with some attacks down the right but DBFC continued where they had left off with two quick goals as Kwai and Crommy both claimed a hat-trick. Kwai’s came after a rocket from Sammy was kept out by an outstanding save by the Kennedy keeper – genuinely better than Newley managed all evening – only for the ball to bounce down to Kwai for an open goal. As the Hong Kong weather forecasters could have said this week: ‘It never rains but it pours’.

Crommy then picked up a fourth, when he took about six touches to get the ball out of his feet and facing in the right direction before emphatically firing a shot into the top corner. Grandstand switched on the vidiprinter. 8 (Eight) – 0.

Still greedy for more, Crommy lined up a free kick 25 yards out, which he clipped carefully into the keeper’s hands, like a Crown Green Bowler curving the ball onto the jack. Sammy learnt from this ahead of another free kick five minutes later, and applying the laws of physics, tried to bullet the ball straight through the wall with enough force to almost carry one of the blockers back towards the goal line. The resulting corner was again clipped to the far post where we were getting a lot of success but no goal this time.

After a fairly comprehensive demoralisation job of the right sided defenders for 60 minutes, Sammy moved to the opposite wing and hadn’t lost any of his energy. Twice he got behind the defence to slide the ball across to our forwards lining up. The first time, Wakasso, who had started the move, continued into the box and thought he would dummy the ball six yards out, assuming Brendon would be on hand for the finishing touch but found the ball behind him. An almost carbon copy two minutes later, found Shyne and Brendon both on top of the ball. Those on the sideline enjoyed the Chuckle Brothers ‘to me, to you’ skit that played out (non-UK players, please youtube) but this allowed time for the Kennedy defender to nip in and whack the ball clear. The third time he broke down the same channel, Sammy did the sensible thing and, finding himself with a straight line to goal, took the chance himself, slotting ball into the bottom corner.

There was just enough time to enjoy watching Jonatan wobble over and San slice a shot from the edge of the box after both had put in serious shifts controlling the game in the middle of the park. Luckily, for these two who had nothing left to give (and probably for all concerned), the floodlights then went with five minutes still on the clock and that was that.