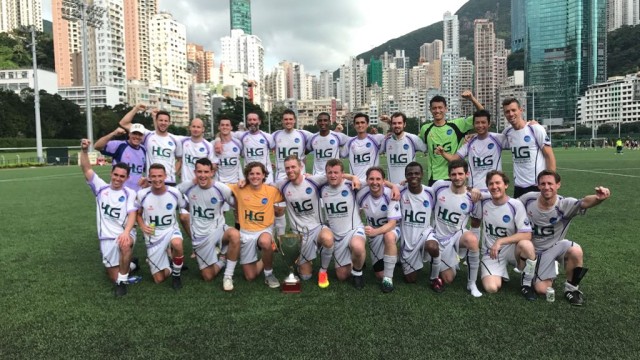 DBFC became Champions Cup winners on 10th June after beating Rude Bar FC 4 – 0 in the final. This gives DBFC the Legal League Double to end a terrific season. A sizeable crowd of DBFC supporters had gathered around Scott Holmes’s cooler box full of wine and beer ready to watch this match and Rude Bar had a sizeable support also but not so well prepared with vital supplies. It was a blistering hot day and in the second half many players wanted to be substituted, mainly to get their hands on an early cold beer. This suited the manager who had 8 players on the substitutes bench eager to get on and play, which he managed. So after the match was won champagne and wine and beer flowed before showers and the Pier Bar. Some players somehow found the capacity to venture into town to party and call at the losing teams sponsors bar (Rude Bar) to rub in the DBFC victory. Other DBFC players wobbled onto the ferry eager to get to their beds. 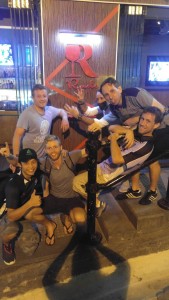 The HK Government’s very hot weather warning was in force and the Happy Valley Cauldron exacerbated the situation. Fortunately, both teams had lots of players, foreseeing that many substitutions would have to be made during the game. Both teams brought down a decent number of supporters so there was an uplifting buzz around the pitch as well as cooler boxes full of drink in anticipation of celebration. Obviously one of the teams’ beers would taste sweeter than the others at the end of what was setting up to be a classic encounter.

It was DBFC that took the upper hand straight from kick-off, closing down quickly when RBFC had possession and fast passing when we had the ball to pressure the RBFC defenders. Within the first 5 minutes this pressure led to a RBFC defender coming in to the back of Zol to give away a soft free kick just outside the left corner of their 18 yard box and JB stepped up to fire a curling free kick towards the centre of the RBFC goal. The RBFC keeper’s first touch of the game saw the ball goal through his hands: granted the ball was fired in at pace just under the cross bar and his sight line was blocked by the many players in the box, but still RBFC were stunned.

Soon after the restart, twinkle toes Dom went down like a sack of spuds and had to come off because of a twisted ankle. On goes Danny Loup to replace him. DBFC did not let up on the fast pace of the game and kept the RBFC defence under pressure, creating a number of chances to stretch the lead. RBFC were restricted to punting the ball up field for their strikers to chase but the DBFC back line, led by Kieran and Syd as the DBFC CB duo was firm and first to the ball. It wasn’t long for DBFC’s second goal. A passage of play through midfield found Darius on the right to come in field and slip through JB on the left to run onto the RBFC goal at a narrow angle and scream a thunderous shot over the RBFC keeper’s head into the roof of the net.

RBFC tried to get back into the game and had some periods of pressure in the DBFC box from corners and free-kicks and could have been luckier with balls bouncing free in and around the DBFC penalty area. However, some last minute blocks and defending and some bravery from the DBFC keeper Yanou kept RBFC out. DBFC always looked threatening when attacking and it was an incident off the ball that got DBFC their third goal. A passage of play came to Ben in an advanced position and he floated in a long cross towards the RBFC far post but before the ball had dropped anywhere near, the referee blow the whistle and pointed to the penalty spot. Zol had been positioning himself ready to launch for a header when the RBFC defender made a two hand push in his back right in the line of sight of the referee. The reason for the penalty was not apparent for many who were out of view but the referee was unwavering in his decision having had the clearest line of sight. A soft penalty for RBFC to give away that JB slotted home to claim his hat-trick.

Morse signaled he was succumbing to the heat and on went Simon for all of 5 minutes after a blow to the face result in budgies flying around his head and Reto coming on to take his place and close out the first half.

DBFC went in 3-0 at half time and JB and Zol came off to take a break from the heat. Scott Holmes went on up top and Dan K to LM. Yanou gave the keeper’s gloves to Martin Yu for the second half.

Although RBFC put up a better fight in the second half they couldn’t break down the DBFC defence and it was DBFC that continue with good football and commitment. In the last 20 minutes Darius, Pascal, Danny Loup and Ben made way for Simon, Zol and JB to come back on and for Jordan Roberts (recovering from injury) to play his part in the DBFC win. DBFC continued to attack and had a number of further chances to score and the fourth goal eventually came when JB ran the ball down the left skinning a couple of players and lay it off to Zol to slot home.

The game was played with tremendous spirit and commitment from both sides but it was DBFC’s day to take the upper hand with great passages of attacking football, fully committed and confident defending and 120% effort from every single DBFC player. Right from kick-off DBFC did not let loose of this game and were worthy winners. Gazza was so proud of his side.

DOD: This has to go to Kieran Donnelly for getting caught on video struggling to open a champagne bottle after the cup was presented and everyone was bouncing up and down. He eventually got there, bless his little greasy eye-brows, and joined in the celebrations.