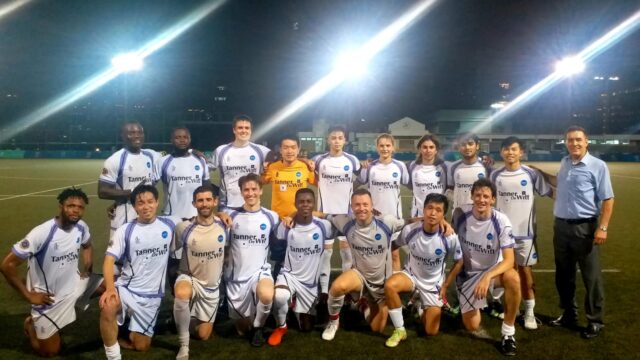 “He’s here, he’s there, he’s every f*cking where, he’s Stevie Lang” was the chant ringing out from the fans at full time, as Stevie Lang completed his comeback with an acrobatic header.

Always a tough match for DBFC, with our three young boys having to bail on the game for their commitment to youth team football! Not to worry though, in the vets we trust, and big Pierre came from our Vets team to help out for the match. We started the game looking strong.

Tita gave his usual pre match chat, getting us ready and telling us to focus on positivity and playing as a team. Great words as usual.

We started well and controlled the possession, creating a number of chances with La Fleche getting into the box. Pierre was having some joy too, and Crommy fashioning himself chances. We were not on target unfortunately, but no one got on the attackers backs as we knew the goals would come. Soon enough, a rubbish corner from Makito was handballed by a KCC defender – Crommy scored the resultant penalty and we went ahead.

Half time talk focussed on us just continuing to do what we were doing.

Second half started with us under a bit of pressure, with Cavs having their best spell of the game. We did however get hold of the game, and Steve Lang who came on during the first half, powered into the box to head in his first goal of the season. Two soon became three when Pierre took advantage of a rebound off a KCC player that came to him in the box, performed a disco dance move that Awal would be proud of to fake the goaly, and then slot into an empty net.
Three nil win, happy days