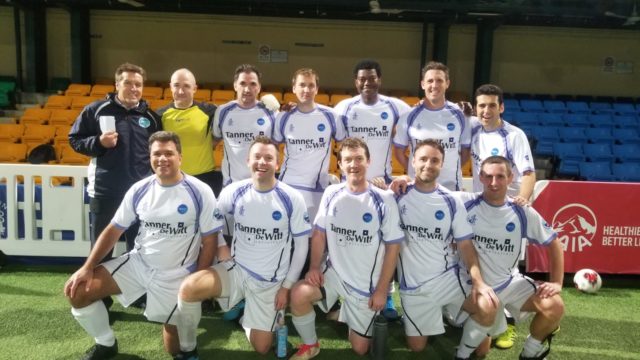 A welcome return to football gave a much needed run out for many players in what turned out to be a hard fought and good game of football between two good squads.

Setting up in a 3-5-2, DBFC controlled possession with good movement and interplay. HKFC found it hard to break into the DBFC area, with Riggers marshalling the defence, wing-backs Sam and Travis dropping in to complete their defensive duties and Thierry providing midfield protection in front of them. Indeed, the hosts only had one chance all half, which the striker prodded wide under pressure.

Up front, the DBFC forwards paid the price of this as the service was limited despite good work by Steph and Scotty off the ball as Pascal, Crommy and the wing-backs found themselves providing vital interceptions in the centre of the park rather than being able to effectively support forward play.

The deadlock was broken 5 minutes before the break when Macca launched a long pass to sub Resco who hit a crisp first-time volley from outside the area to lob the advancing keeper and put the Whites ahead.

The second half started in much the same vein but soon the lack of match fitness started to tell on the DBFC players who, unlike their hosts, have not had many matches recently owing to the convid-19 closure of so many pitches. Gaps started to appear as tired legs reacted more slowly and the HKFC pressure started to build. However, it was DBFC who had the first corner of the match and chances were notably missed from a Crommy header and a Ben shot as the Whites looked to extend the lead to 2-0.

HKFC started winning a lot of debatable free kicks around the area and were forcing some corners. It was from one of these free kicks that HKFC found their equaliser, a quick break upfield and a hopeful cross found a HKFC forward unmarked in the 6-yard box, he slotted home to make it 1-1 with 15 minutes left on the clock. DBFC were unhappy that the free kick was farcically awarded in the first place.

The final period saw both sides looking to grab the winner but only one chance was created as HKFC broke through and scored with just three minutes remaining. Appeals for handball were turned down and DBFC were denied a deserved draw in an otherwise enjoyable match.

MOM: Riggers gets it for a commanding defensive performance. Honourable mention to Thierry for his many tackles to break up play in midfield.

DOD: None – everyone can be pleased with their contribution.