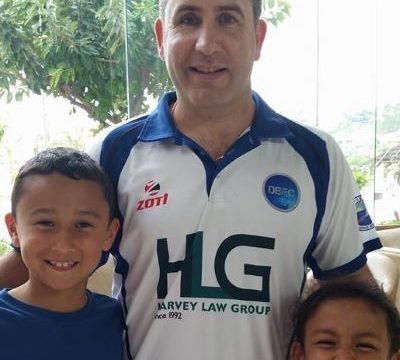 (Full teams, scorers and results below)

The relentless heat and humidity couldn’t prevent an enjoyable and well attended 7-a-side tournament to remember and honour our much-missed friend, Robin Armstrong, who we sadly lost in November 2017.

The tournament comprised two rounds of group games, with final positions determining the RAM Trophy, Plate and Wooden Spoon streams. The two highest placed Discovery Bay team would also play for the DB Cup – a cup that Robin had played in many times. Group 1 had DB teams T8 Whites and the T9-ers, with the visiting USRC Vets completing the triumvirate, whilst ADW Spartans were the guests in Group 2 with the DB teams T8 Blacks and DBFC Vets.

It was clear from the outset that the DB teams’ experience of playing weekly 7-a-side games on their home DBIS pitch provided an early advantage over the visiting teams as they took a while to adjust to their new surroundings.

In Group 1, the opening fixture saw a strong T8 Whites team beat USRC 2-1 in a close match. USRC’s Greg Turner then scored the game’s fastest goal (5 seconds!) against the T9-ers but the T9-ers rallied for 2-1 win, including a rare Shukri Wan header. T8 Whites and T9-ers played out a goalless draw to finish the first-round joint top leaders.

Meanwhile in Group 2, the current RAM Trophy holders, T8 Blacks, reinforced their credentials as favourites by despatching Spartans and DBFC 2-0 and 3-0 respectively to top the Group, whilst DBFC scored a literally last second goal to pip the Spartans 2-1, giving them second place – a draw would have seen Spartans into second.

In the second round of group matches the T8 Whites won Group 1 with 2-0 wins over USRC and the T9-ers, including goal of the tournament from Damian Trimingham – a delightful first-time half-volley lob over the goalkeeper from outside the area. In the other game USRC comfortably beat the T9-ers 3-0 to record their first win of the day but it wasn’t enough to take the Group’s runners up spot and they finished in third.

In Group 2, the Spartans must have wondered which ladders they had walked under following two 2-0 defeats in which they conceded early goals against the run of play and then late goals as they were picked off going for the equalisers. The final game saw T8 Blacks’ attempt for a perfect record thwarted by a DBFC goal that required a late equaliser but nevertheless saw T8 Blacks top the Group over DBFC.

With the Groups’ third-place teams (USRC and Spartans) going automatically through to the Wooden Spoon final, the finalists for RAM Trophy, Plate and DB Cup were to be settled through a semi-final knock out round.

The first semi-final was a tight affair between (Group 1 winners) T8 Whites and (Group 2 runners-up) DBFC. A very even match that could have gone either way was finally settled by a Miller Hudson goal to give DBFC the victory. T8 Whites could feel aggrieved not to have made it at least to penalties.

The other semi-final between the other Group winners and runners-up saw T8 Blacks dominate against the T9-ers whose resolute defending looked as if it would take the game to penalties until a late O.G. under heavy pressure meant that T8 Blacks would deservedly reach the final at the T9-er’s expense.

The finals commenced with the Wooden Spoon battle between USRC and Spartans. The objective was to avoid the Wooden Spoon (by winning the match) and was very much in line with humour and spirit that anyone who knew Robin would recongise. USRC and Spartans played the game in that spirit and were a credit to their clubs and to the memory of our late friend. A goal from USRC’s Greg Turner was cancelled out by Andy Hull’s goal, but a late Ciaran Faye winner was enough for USRC to win 2-1 and for the Spartans to hold the Wooden Spoon (and to take it off this author!).

The Plate Final was contested between T8 Whites and the T9-ers. This was a close match with early chances at both ends. As the game progressed, however, the T9-er keeper was called into action more often and was finally beaten near the death with a strong shot from Andy Archer that the keeper got a hand to but was unable to push around the post. T8 Whites held on for the 1-0 victory to win the Plate.

With two DB teams reaching the RAM Trophy final, it was combined with the DB Cup in a winner-takes-all affair. Defending Trophy holders, T8 Blacks, were also looking to hold the resurrected DB Cup for the first time since 2012, whilst DBFC Vets were aiming to get their names on the trophies for the first time.

As the Final progressed it was clear that the loss of key man Scotty Holmes to the effects of the intense heat had affected DBFC Vets’ cutting edge and ability to hold the ball up front, which in turn handed much of the initiative to T8 Blacks, who took full advantage by keeping play in the final two thirds of the field. The breakthrough came though mid-way with T8’s Filipe de la Fuente taking a chance after his teammates had missed several others. DBFC had a couple of chances to equalise before Peter Troy rolled back the years to wrong foot a couple of players and score a late second to seal the victory 2-0.

So, the Tournament was over another year, with the teams decamping to Hemmingway’s for some well earnt beers and reflection on the day’s activities. Old friends were reunited, new friends were made and most of all we remembered our friend Robin in a manner that we expect he would have appreciated.

Funds raised from the Tournament shall be given to Robin’s family who are survived by his wife Bunty and his children Ava and Owen. If you want to donate please send to HSBC 571-284686-833 STEVEN JOHN RESCO.

The organisers would like to thank the T9-er team who paid the pitch hire fees, Gianluca Temperini who kindly donated the Trophy, Steven Resco for the Plate donation and the team captains (Laurence Rudge, Alex Key, Neil Juggins, Ross Carter, Rafa Lopez and Steve Rudall) for organising their teams. Thanks also go to Nick Flavell, Dom Hill, Sam Riley and Baz Brown for all their help in organising behind the scenes.

Finally, a big thank you to all the players that gave up their Saturday and made the effort to play. 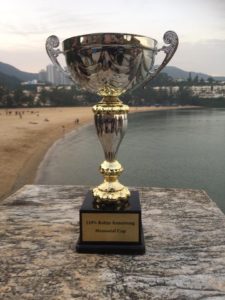 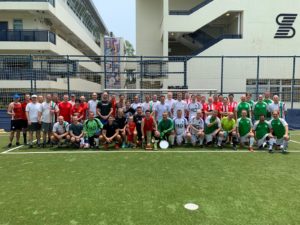 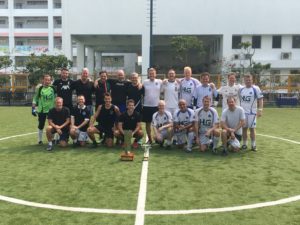 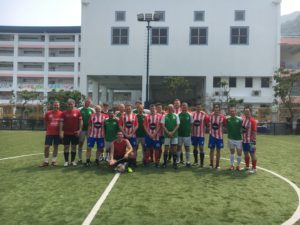 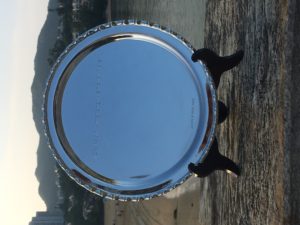