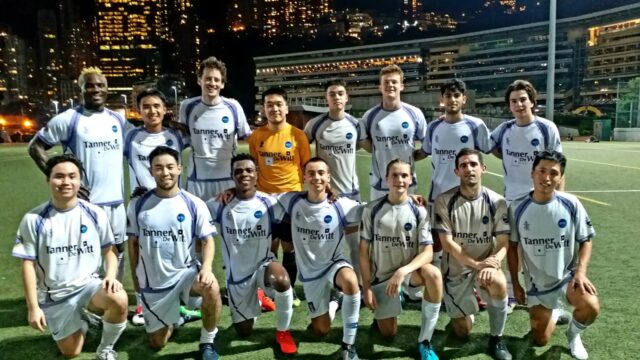 DBFC were struggling for numbers this week and the squad only came together on Friday when Tita and Nik Light confirmed “yes” and Darius’s swollen ankle had recovered sufficiently to help; so in the end a heathy number of 15 players. Danny and Makito stepped up to get the team warmed up ready for a fast start. DBFC had overall a very young squad and Gaffer Gaz warned all the players the bigger older Spartans would be physically challenging. The young lads were to stand up to this challenge and give back and rely on their ball skills, fitness and team work to see Spartans run out of energy. As you will read further this scenario played out in the second half.

Not a good start to this game; as the gaffer declared the starting line-up, Charlie said he couldn’t start at Centre Back because “his knee was locked-up”. The instant reaction, in the best Teesside accent, of “find the flipping(edit) key then” didn’t work, so up steps Nik Light to offer himself as Centre Back (and what a fantastic job he and Tita did).

The not so good start continued after kick off when most of the players seemed flat like a punctured tyre and Spartans took advantage with quick and strong challenges to win possession and spring forward to their big forwards. Tita and Nik were working so hard to break the attacks and the team managed to keep Spartans out with no real clear attempt on the DBFC goal. This slow start, with DBFC second best, lasted for 25 minutes when the pendulum stated swinging DBFC’s way. The pace quickened and DBFC’s movement and possession increased going forward. The last 10 minutes of the first half was certainly presenting goal scoring chances for DBFC. An indication of the flat start was the fact that apart from a speculative snap shot from 25 yards out by Makito that was a little high and wide; it was 35 minutes played before a clear shot on goal was made by Amit following a very good fast passing move to penetrate the Spartans’ defence. It was 0-0 at half time.

The Second half started much better with DBFC picking up as they finished the first half and moving much quicker in the tackle and with the passing. They were getting into the Spartans’ box with every press forward and it was obvious the Spartans’ players were tiring. The 3 active subs on the bench, the 4th being Charlie who was still looking for the key to unlock his knee (Charlie had sensibly agreed it would be best to sit this game out rather than risk a more serious problem) were midfield players so the plan was for player rotations across the midfield every 20 minutes. Also, Gaffer Gaz moved to a 4-5-1 formation to take control of the centre of the pitch and the wingers to press up and in-field to support Krisna.

It was 15 minutes into the 2nd half when the breakthrough happened, after a multitude of attacks. DBFC moved the ball down the right between Darius (now playing right back) and Nick and Amit to get in a cross that Benji got to and his shot blocked and Spartans’ clearance fell to Danny just outside the 18 yard box to place a low drive into the bottom corner of the Spartans’ goal. DBFC 1-0 up.

DBFC continued to dominate and press for the next 15 minutes creating many chances to score the second goal but it just didn’t come. Then a little bit of fatigue crept in to the DBFC legs and Spartans regrouped to press with the high ball into the DBFC goal area for their big lads. Tita and Nik were again finding themselves constantly battling and pulled DBFC through this period. 5 minutes left on the clock and Spartans thought they got the equaliser, when a corner wasn’t cleanly headed and fell in the box for a scramble that eventually fell to a Spartans player a yard in front of the DBFC goal to blast the ball in the net. The linesman instantly flagged for offside. Spartans pushed everyone including their keeper forward in search of the equaliser when the ball broke for DBFC and Leo sent it down the left for Krisna to pick up just inside Spartan’s half and cleverly jinked past the tackle of the Spartans’ keeper playing very high, leaving a free run onto an empty net. That was the last play of the game as the referee blew full time on the restart. DBFC win 2-0.

MOM: every player on the team were exceptional in the second half but constantly good through the full 80 minutes were Tita and Nik at Centre Back to keep Spartans out and Ricky a clean sheet. However, the Gaffer’s nod goes to Nik for offering to do the CB role when Charlie ducked out and pleasantly surprising Gaz on how strong and confident he was in that position. Well done Nik.

DOD: Danny would have been in contention for this following is feeble free-kick attempt on goal from 25 yards that if wasn’t 5 yards wide would have been counted as a pass back to the keeper.

However, Charlie cannot escape this award after his “locked Knee” episode a minute before kick-off.