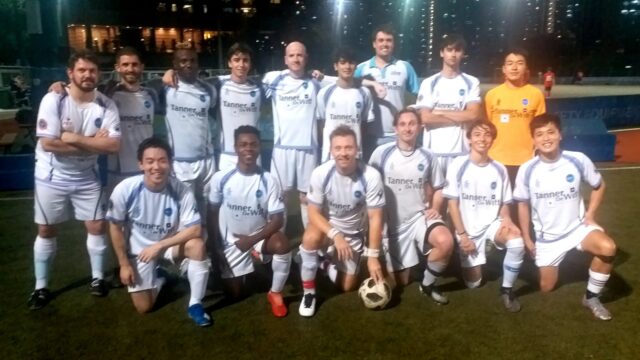 This was the first game of the 2021 / 2022 season with only one month break since playing to win the Legal League cup and with lots of last season’s players leaving Hong Kong DBFC was still recruiting and in a state of flux. Hence there was a lot of new faces in the squad against HK Scottish. The added problem of both regular keeper Ricky and stand-in keeper Travis not being available led to a first ever call up for Bradders into the LL team.

During the warm-up it was noticeable that the HK Scottish side were on average twice as big as the DBFC side and this proved to be used well by the opposition. Plenty of fit young rugby players in their side and two experienced Centre backs.

DBFC started well pushing forward with Awal and Krisna up top and looking likely to score but all the time on the breakdown Scottish long ball to their big fast forwards caused us problems. The game was fairly even when the Stags forward hit a fairly soft shot towards the left side of the DBFC goal from 25 yards that Bradders should have caught easily but inexplicably palmed it inwards towards his own goal. He quickly scrambled to flap the ball out and the defence to clear. However, the linesman on the far left somehow decided the ball had crossed the line when his view was blocked by Bradders and defenders. Despite the protest from Bradders and defenders that the ball was not near crossing the line the goal was still given to put Stags 1 – 0 up.

DBFC bounced straight back with some determined passing football and a good move down the right side culminated with Kieran crossing the ball low for new boy Nik Light to run in from the left side and send the ball high into the net at the right post.

Stags continued with their long ball and looked particularly dangerous on set pieces with their army of giant players. With only 5 minutes left to half time the Stags’ play down the left resulted in a soft cross that Bradders look odds on to catch at the near post but somehow allowed it to squirm out of his gloves for a corner. The corner, usually launched high to the back post, was miss hit low and two DBFC players near the front post didn’t deal with it and it ran through the six-yard box for the Stags’ centre back to bundle over the line to make it 2-1 at half time.

The second half started with DBFC on the back foot with Stags sitting deeper and long ball forward and Tita and Morse having to work particularly hard to keep up. DBFC midfield worked hard but didn’t keep the ball so well and couldn’t find the killer past to Awal or Sam on the wings. DBFC worked their way back in to the game and take the upper hand and a break down the left resulted in Sam firing in a great cross for Awal to come in with a diving header at the far post. With the scores at 2-2 stags continued to sit deep and launch the ball up top as DBFC pressed for the winner. It was stags that prevailed when with about 10 minutes left their long ball was allowed to bounce and the DBFC attempted clearance hit the only Stags forward to bounce back into the box and he scrambled a shot through the attempted tackles by two DBFC defenders and the out coming Bradders to score an unlikely goal. DBFC pressed for the equalizer but it just didn’t come.

MOM: Krisna for non-stop running and hard work. Cramp meant he came off for the last 5 minutes.

DOD: Bradders for fumbled catch attempts that led to 2 stags’ goals and after the game blaming his slippery gloves.