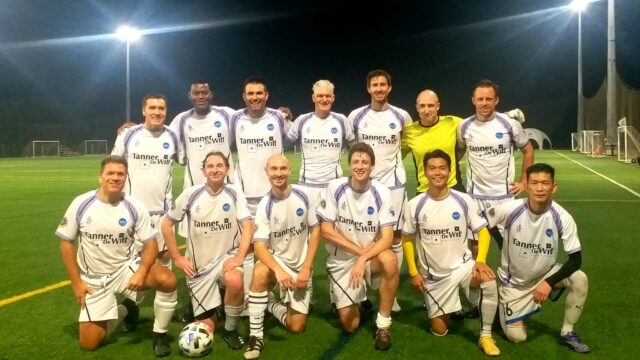 A series of late pull outs meant that DBFC Vets arrived to their first fixture of 2022 with a nervous squad, concerned that there might not even be 11 on the field at kick-off. Despite this, Stephane delivered an impressively professional warm-up given the small group tracking behind him whilst Gazza dusted off his playing registration for his first game in two years and Macca left his dinner to catch a taxi over to TKO. The gaffer’s pre-match pep talk focused on keeping things steady, getting Jevon on the ball and praying that the last couple of squad members would make it in time. Luckily a delayed start to the game, whilst the coaching sessions cleared off and Spartans leaving us to walk to the furthest end of the massive TKO pitches, meant Ping and Tong arrived with moments to spare and suddenly we looked a lot more battle ready for what was likely to be a tough fixture.

Spartan indeed started the strongest but without breaking too many lines. As DBFC began to gain possession, Tong gave us pace over the top and Ben managed to find space to begin penetrating from the wings. As we moved the ball faster, Spartans started to concede free kicks in our attacking half and we looked dangerous from set pieces. The first goal came from a corner, which Tong fizzed into the near post for Jevon to bullet home.

DBFC began to look pretty comfortable although Macca and Gazza, and Stephane and Jevon enjoyed ongoing debates about our playing strategy which just left Morse and Spartans to moan at the ref. Maybe we weren’t all fully focused as Neil channelled his inner Ronaldinho with a no-look pass into the Spartan’s midfielder in an advanced position, before immediately and clumsily taking out their central striker on the edge of the box. Bradders kindly took the blame for the free kick which was fired high into his net leaving the score 1-1 at half-time.

We kept the squad as it was for the second half, but got back in charge in terms of possession and territory. Another free kick, this time from Pickles, was put high to the far post, giving him and Jevon a chance to discuss its misdirected flight before Jevon headed home for his and our second. We had a few more chances in free play, including Tong chasing two defenders and the Spartan keeper, laying the ball back for Stephane who took one too many touches in the six yard box. Macca had done his shift (and needed to digest his dinner), swapping for Pedro, and Tong took a hit to the ankle giving Gazza the briefest of cameos. Both came back on after Tong had almost recovered and Stephane cramped up from his running efforts in attack (and the warm up).

Spartans gained more possession in the attacking third in the last 20 minutes, with Bradders making some excellent stops and nothing quite fell right for their dangerous striker. We had more corners but the triple-teaming approach on Jevon stopped him from gaining a hat-trick. As Spartan’s chased their second equaliser, DBFC countered with pace down the left, finding Pedro in space, who drew a defender before putting Pickles in to fire home.

A hugely pleasing win, which looked very much in doubt at 7.45pm, but was well deserved by the end of night. Hopefully everybody will recover from the New Year illnesses and injuries ahead of next week’s fixture and continue DBFC vets’ unbeaten run.

MOM: With two goals from set pieces and bringing the ball out strongly from centre back, Jevon was the clear MOM.

DOD: As a school teacher, the author cares too much about inclusivity to award the DOD, which has saved Neil from picking it up this week.