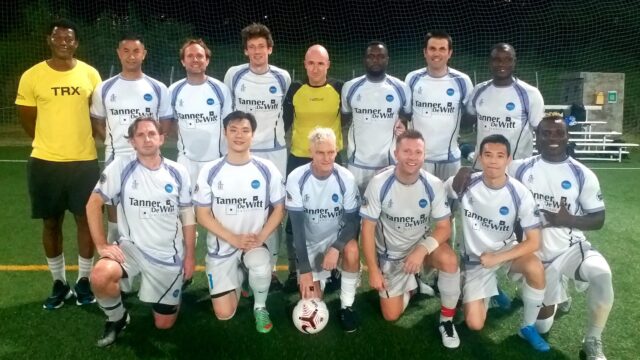 Manager Gazza had to work hard to get a squad together for this game and called on a number of guys from +45s team, as well as a couple of new signings. Although the DBFC Vets have already won the 2020 / 2021 season legends league there are still three games to go and the team aim to go all the way with 100% record.

So the night started with 13 players. Simon was only for the first half (early morning business call) at which point Pedro would turn up at half time (evening business call) to affect a strategic tag partnership. This game was bossed by DBFC from the start, stringing some good passing together but not managing to penetrate the HV Spartans defence with a goal. However, after 20 minutes Pierre collected the ball at 25 yards out and turned to slot a pass between the defenders into the path of overlapping Crommy, who stroked the ball into the far corner. BFC’s second goal came 10 minutes later when a strong run by Nik down the left saw him check back and lay the ball into Crommy’s path to rifle in a low shot that the HV Spartan’s keeper got finger tips to but not enough to stop the ball crossing the line. 2 – 0 at half time.

The second half started with Pedro replacing Simon in centre midfield, Patric coming off for a break, having ran none stop up and down the right flank, and Crommy moving to this right mid position. Akosah went on up front behind Pierre and Nin went on at centre back replacing Neil Lennon.

Again DBFC were playing nice passing football but not effectively penetrating HV defence and so DBFC passing football started to be played deeper in their own third making them vulnerable to goal threats from any mistake. In fact it was a mistake requiring a good save from Bradders that called for another change half way through the second half. Neil Mac came off, after a solid performance at right back, to give others a run for the last 20 minutes and Pedro went to right back, Nin moved up to centre mid and Neil Lennon back on at Centre Back.  This change resulted in DBFC moving up higher in their passing play and soon after it was another drilled pass from Pierre towards Crommy, running out of the HV Spartans box that he dummied to allow the ball to run through to Nik who made no mistake in powering a shot into the corner of the goal.

With 10 minutes left, Crommy came off to allow Patric another run on the right flank and what a job (where does this old bloke get the energy?). Nin and San were completely in control of the mid field and penetrating passes were every few minutes. One pass found Nik running through and he pulled it in to Akosah, who checked out and laid it off to Pierre to blast a shot from 20 yards out into the HV net. The passing play continued and from Nik on the left to Patric on the right and crossed into the box that saw the ball bounce up from an attempted defender’s clearance and Pierre to execute a perfect bicycle kick. Older guys are not supposed to do this stuff!!! A fine way to cap off a 5-0 win.

My report may seem to describe one-way traffic, which it was not and HV Spartans played decent football and had plenty of strong and skillful players. Tita, Morse, Neil Mac, and Neil Lennon put in a great defensive performance and later Nin and Pedro reinforced the defence.

MOM: Must be Pierre for an audacious bicycle kicked goal as well as being involved in setting up 2 goals other than the 2 he scored.